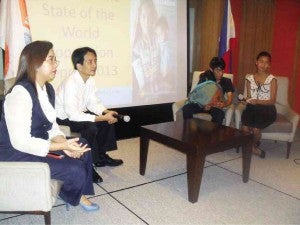 Jeah Gargarita stopped schooling when she was 17, after giving birth to her first child.

Though her pregnancy was unexpected, she said she was excited and happy at the prospect of being a mother. Her boyfriend, Richard Bautista, was happy, too.

But the heavy responsibility of parenthood forced them both to drop out of school.

“It’s difficult to raise a child when you have no job,” Bautista said.

Gargarita is one of 20,000 girls under 18 who give birth in developing countries every day.  The State of World Population 2013 report, released recently by the United Nations Population Fund (UNFPA), said some 7.3 million adolescent girls give birth each year.

Of this total, 2 million were under 15. If current trends continued, this number could rise to 3 million a year in 2030.

The report highlighted the serious impact of early pregnancy on a girl’s education.

In every region in the world, “impoverished, poorly educated and rural girls” were more likely to get pregnant than their wealthier, more educated and more urban counterparts, the report said.

Early pregnancies also occurred more frequently among “girls who are marginalized, have no access to information and services, have little say in decisions affecting their lives, and whose realities and futures are determined by others,” it added.

Health Undersecretary Janette Garin said pregnancy “increases the risk of dropping out of school and facing limited economic opportunities.” She added that “family pressure” and “child-care demands” kept these girls out of school.

In a statement, UNFPA executive director Babatunde Osotimehin said society often blamed “only the girl” for getting pregnant.

“The reality is that adolescent pregnancy is most often not the result of a deliberate choice, but rather the absence of choices and of circumstances beyond a girl’s control. It is a consequence of little or no access to school, employment, quality information and healthcare,” he said.

Michael Tan, dean of the University of the Philippines College of Social Sciences and Philosophy, said schools, work places and communities contributed to the rising number of early pregnancies because of the “absence of sexuality education” and “propagation of distorted and discriminatory gender values.”

He said, “Problems of the young often start with adults, with our denial, our distorted values, our exclusion and our unwillingness to listen.”

Tan pointed out that other causes contributing to the rise in number of “kids who have kids” included absence of laws on reproductive health (RH), lack of or no support for safe places for sexuality education and services, lack of maternal services for adolescents and nonexistent family planning.

The UNFPA report offered concrete solutions to curb the trend and protect girls’ human rights and well-being. It called for actions that “empower girls, uphold their basic human rights, and put them on equal footing with boys” to reduce the number of adolescent girls getting pregnant annually.

One of the priorities it mentioned was education.

The report showed that girls who remained in school longer were less likely to become pregnant. Education also reduced the chances of child marriages and it delayed childbearing, eventually leading to healthier births.

It also prepared girls for future employment and livelihoods, raised their self-esteem and their status and allowed them to participate in making decisions affecting their lives.

Garin said an “age-appropriate and comprehensive sexuality education” was the primary solution to teenage pregnancies. She also recommended the creation of more adolescent-friendly health services and the ending of child marriage, sexual coercion and violence.

“Education still is foremost … If you are not well-informed, you might miss a lot of things, even opportunities,” she said.