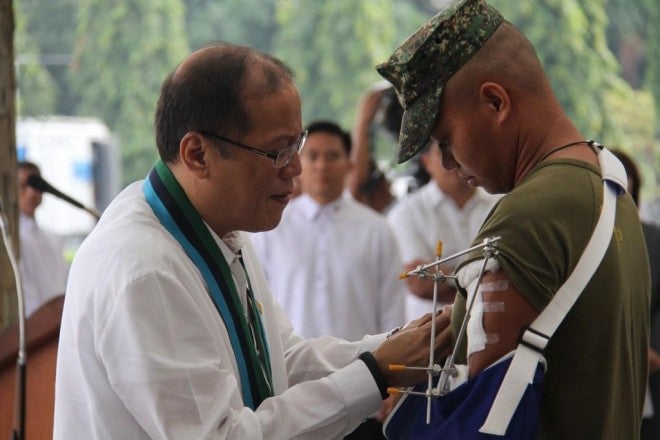 President Benigno Aquino awards Marine Private First Class Eduardo A. Jose who was wounded in action with the Wounded Personnel Medal. The AFP is yet to award more than 1,000 soldiers following Monday’s batch of awardees. Photo by SSg Randulf Obinque PAF

These were the words of Defense Secretary Voltaire Gazmin on Monday when asked if he thinks Malik, the Moro National Liberation Front member who led the attacks on the ground in the three-week Zamboanga City gunbattle last September, is already dead.

“We have no evidence, but their spokesman [Emmanuel] Fontanilla said Malik is alive. If he is really alive, they should show us. It’s been a while, but why hasn’t he showed up yet?” he told reporters at Camp Aguinaldo.

“That’s what happened with Abu Sabaya in the past. They said he did not die, and yet he has not showed up,” he said.

Sabaya, an Abu Sayyaf leader, was said to have been killed by government forces in 2002. No proof of his demise had been presented, however.

“I think there’s no longer an issue with Malik. They’ve been saying that he’s still alive and yet he has not showed up,” Gazmin said.

“Justice has not been served in the sense that we have not yet arrested Misuari,” Gazmin said, but added that they are “exerting all efforts” to get him.

Also on Monday, 18 out of over 2,000 soldiers that were deployed to Zamboanga City were awarded at Camp Aguinaldo for their “gallantry in action and acts of heroism.”

The DCS, the second highest award in the military after the Medal of Valor, was awarded to Lieutenant Colonel Oriel Pangcog, Battalion Commander of Joint Special Operations Task Group Arrow and Captain Reynir Nirza of AFP Joint Operations Group for their “conspicuous acts of courage and gallantry in the face of the enemy.”

Western Mindanao Command chief Lieutenant General Rey Ardo and Deputy Chief of Staff for Operations Brigadier General Rodelio Santos were recipients of the DSS for their “eminently meritorious and valuable service rendered during the Zamboanga crisis.”

Also a recipient of the DSS was Lt. Col. Ramon Zagala, public affairs chief, for representing the military organization during the crisis.

His media appearances “successfully expanded the reach of AFP’s accomplishments and established the AFP’s legitimate crisis resolution capabilities and its reputation in the world,” his award citation read.

A Bronze Cross Medal was awarded to Maj. Caezar Almer E. Candelaria of the Medical Corps “for acts of heroism involving risk of life as Team Leader of the Medical Team, Special Operations Task Group.”

A Military Merit Medal with Bronze Spearhead Device was awarded to Air Force Maj. Renie N. Aureo and Army Cpt. Dranreb E. Lansang for gallantry in action; while Marine Pfc. Eduardo A. Jose who was wounded in action received the Wounded Personnel Medal.

The AFP had previously awarded 550 soldiers in the Zamboanga siege.

“This 18 [personnel]  is just a representation but everyone is recognized especially those directly involved in direction with enemy forces at that time,” Zagala said.

Aquino, in his speech, was all praises for Gazmin who survived through the years — from the coup attempts during his mother’s presidency to the Zamboanga siege.