Senator Estrada flies to US, but without Precy | Inquirer News
Close
menu
search

Senator Estrada flies to US, but without Precy 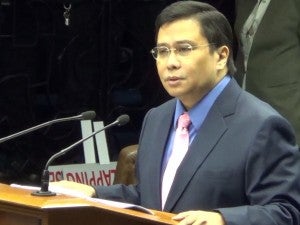 MANILA, Philippines—Ignoring the possibility his passport may be canceled, Sen. Jinggoy Estrada left the country for the United States Saturday morning.

Estrada boarded a Cathay Pacific flight to Hong Kong where he was to take another plane to San Francisco early in the afternoon, a member of his staff said.

Estrada left without his wife, Precy, who is supposed to get a second opinion from American doctors regarding a lump on her breast.

Bienne Andrews, Estrada’s media relations officer, said Precy Estrada will follow her husband on Friday as she had to attend to family matters, including getting their youngest daughter excused from school.

The couple intends to take along their youngest daughter, Jill, to the United States, Andrews said.

Estrada, who’s facing plunder charges in the Office of the Ombudsman in connection with the P10-billion pork barrel scam, has promised to return before Congress resumes sessions on Nov. 18.

While the Department of Justice has asked the Department of Foreign Affairs (DFA) to cancel Estrada’s passport, as well as those of his corespondents in the plunder case—Senators Juan Ponce Enrile and Ramon Revilla Jr.—Justice Secretary Leila de Lima has said that there was no legal impediment to Estrada’s departure.

Lawyer Estelito Mendoza, Estrada’s lawyer in the passport cancellation case, has asked the DFA to give Estrada an extension of up to 20 days to comment on the justice department’s request.

Sen. Jinggoy Estrada leaves for US