Sen. Jinggoy Estrada leaves for US 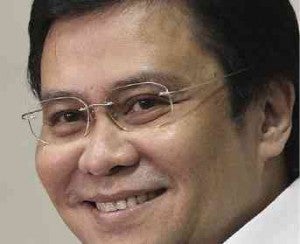 (Editors’ note—We are reposting this article to correct an earlier story that said Estrada left for the US with his wife.)

MANILA, Philippines—Senator Jose “Jinggoy” Estrada left for the United States late Saturday morning amid a recommendation by the Department of Justice to cancel his passport in connection with the pork barrel scam, a member of his staff said.

Estrada left without his wife Precy, who was supposed to get a second opinion from US-based doctors as regards a lump on her breast.

The senator boarded a Cathay Pacific Air flight CX 906 bound for Hong Kong before noon and from there took a connecting flight to San Francisco, California.

But Estrada assured in earlier reports that he would return to the country before the Senate resumes session on November 18.

Bienne Andrews, Estrada’s media relations officer, said Precy will follow Estrada on Friday as she still has to attend to certain matters, including excusing their youngest daughter from school.

The couple intends to bring the youngest daughter Jill with them to the US, the media staff added.

In a previous Philippine Daily Inquirer report, Estrada indicated that he would accompany his wife to the United States to get a second opinion from American doctors regarding a lump in her breast.

On October  24, the DOJ asked the Department of Foreign Affairs to cancel the passports of Estrada, Senators Juan “Ponce” Enrile, Ramon “Bong” Revilla Jr. and others involved in the pork barrel scam.

But Justice Secretary Leila De Lima on Monday said no one could stop Estrada from going to the US as the DFA has yet to act on cancellation request.

Lawyer Estelito Mendoza, Estrada’s lawyer on the issue of the passport cancelation, has asked the DFA for an extension of up to 20 days before the senator could file his comment as regards the DOJ’s move.

Estrada left just as the country was about to wind up its holidays in remembrance of the dead.

Estrada said he was in Zambales on Friday morning to observe All Saints’ Day with relatives from her mother’s side.

He said he also visited his friend Rudy Fernandez’s resting place at the Heritage Park in Taguig on Friday afternoon.

“Definitely, I will return,” Estrada said in previous interviews before leaving for the US.