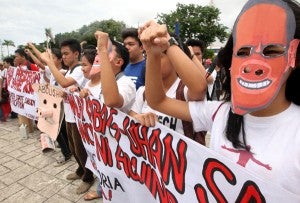 The pork barrel issue is far from dead even though Filipinos are often derided for having a short memory, according to the social media activist who helped mobilize people online for the Million People March against the pork barrel at Luneta in August.

Filipinos are not about to let go of the issue because they haven’t heard anything to convince them that there is going to be a change, said Peachy Rallonza-Bretaña, the advertising executive and so-called Internet loudmouth who helped  jump-start the first massive protest action against the popular Aquino administration.

“If the government thinks the people will forget this soon because of shortened memories, I don’t think that’s the case,” she said.

According to Bretaña, the idea that public funds were stolen and could continue to be diverted for private use under the current system, continues to strike a chord with Filipinos.

“It’s because everyone who pays taxes in one form or another is affected,” she said.

“There’s no kapamilya, no kapuso, no kapatid here. The lines are blurred, everybody’s affected,” she said.

And she believes people are not ready to forget the issue because they’re not yet convinced that change will actually happen.

“Nothing has been done to tell us that there is going to be a change, nothing that is acceptable,” she said.

Bretaña, whose network of online friends continues to call for the scrapping of all pork barrel funds and for transparency in how public money is used, said the education campaign against the pork barrel system will continue to be pursued in various forms.

“We are spreading this in a way that people from different backgrounds will [be able to] understand the issue better, how it grossly affects them,” she said.

According to Bretaña, awareness of the issue seems to be prevalent, based on her conversations with taxi drivers and ordinary workers, and from the observations of retired Chief Justice Reynato Puno.

She had met earlier with Puno who has launched a campaign for a people’s initiative, through which citizens would pass a law to abolish the pork barrel system by direct action, bypassing Congress.

Bretaña is also active in a group calling for a 100-day countdown for a transparent investigation of the pork barrel scam and the prosecution of all those involved. The proposed deadline is Dec. 6.

The group said it wanted to see cases filed, assets frozen and arrests made. It also said the initial freezing of releases from the Priority Development Assistance Fund (PDAF), the official name of the congressional pork barrel, was not enough. An accounting has to be made of the funds that have been spent, it said.

As to what the group would do after the deadline passes, Bretaña said this was still under discussion. But there are meetings with various groups and personalities who are also involved in efforts to initiate reforms in the system, she said.

The pork barrel scandal erupted after the Inquirer came out with a series of reports of how detained businesswoman Janet Lim-Napoles had allegedly set up a kickback scheme of channeling congressional pork barrel funds back to the legislators’ pockets through a system of bogus nongovernment organizations and ghost projects.

The resulting public outcry also gave rise to demands to remove from the budget all kinds of pork barrel funds, or lump sum amounts that could later be used for any project of the legislators.

The brouhaha also brought to light Malacañang’s Disbursement Acceleration Program (DAP), an economic stimulus program funded from savings impounded by the administration. But questions were raised after it was learned that a portion of the DAP was transferred to lawmakers for their chosen projects, over and above the legislators’ pork barrel entitlements.

Critics have also questioned the method by which funds were categorized as savings, and also the use of funds for projects not specified in the budget.

Bretaña said President Aquino himself was helping sustain interest in the issue through his public pronouncements, whether or not these are received positively.

Not a defense of pork

True enough, Palace mouthpieces yesterday continued to explicate on the theme of the President and the pork barrel, particularly after Mr. Aquino was seen as defending the practice in a 12-minute televised statement to the nation on Wednesday night.

In saying that he’s no thief, the President wanted to personally assure the public that he will not tolerate any misuse of pork barrel and other state funds under his watch, Malacañang said.

“The President’s speech was meant to emphasize the government’s determination to prosecute and hold accountable all those responsible for the theft and misuse of public funds,” said Presidential Communications Secretary Herminio Coloma.

He denied that Mr. Aquino was defending the pork barrel system.

“For those who may have missed this point while listening to his televised address, the President emphasized that [the DAP] is a process in which government can spend both savings and new and additional revenues that were sourced from government’s efforts to stop the connivance of some in bidding for contracts, in padding costs, overpricing, and kickbacks and from the proper spending of our budget,” he said.

Coloma said the Palace wanted to engage DAP critics in “a meaningful dialogue and shy away from name-calling.”

One of those critics was an umbrella group of workers from the business process outsourcing industry which denounced what it said was Mr. Aquino’s “gall” in defending the pork barrel system.

“The money that we pay as taxes is being compromised and the President has the gall to tell us that it is not being pocketed,” said the BPO Industry Employees Network, or BIEN, a call center employees organization.

Coloma said it was never the intention of the President to sweep under the rug incidents of misuse of taxpayer money, whether in Congress or the executive branch.

Contrary to claims that the DAP is unconstitutional, Coloma said it was but a “process created in accordance with the law to look for savings (in order to fund) items already authorized in the budget.”

Mr. Aquino’s entire speech explained the mechanisms of the DAP, he said.

“It was a painstakingly detailed and conscientious speech to educate people on the process itself, so they will be well-informed,” he said.

In a radio interview, deputy presidential spokesperson Abigail Valte denied that the President’s speech on Wednesday night was an attempt to shore up his plunging approval ratings in the wake of the pork barrel controversy.

“The President felt that it was important for the public to hear what he had to say about these issues, and I think he succeeded insofar as letting the public … continue to talk about it, which is good for public discourse,” she said.

Give it up already

Meanwhile, opposition Sen. JV Ejercito on Friday said the President should heed the public clamor and just give up all pork barrel, including his own.

“DAP is illegal. It allows the President to obtain an absolute power over government funds without congressional approval and will use it for political favors,” said Ejercito in a text message.

“P-Noy [President Aquino] must not be selective in identifying what is pork. PDAF is pork. SPF [special purpose fund] is pork. DAP is pork,” Ejercito said in a text message.

Ejercito has filed Senate Resolution No. 287 seeking a Senate inquiry into the DAP disbursements.

Sen. Nancy Binay, another minority senator, said it would be best to wait for the Supreme Court decision regarding the DAP.

“After having too many versions and definitions, perhaps P-Noy [in his speech] wanted to end all speculations about the DAP. If the intention was to appease the people, giving it up would be the best action,” Binay said.

Sen. Jinggoy Estrada, one of the 38 charged with plunder over the pork barrel scandal and who delivered the privilege speech that forced the administration to disclose the DAP, said he would leave it to the Supreme Court to determine whether the DAP was legal.

“If the President believes that the system is constitutional, so be it.  But there is still the Supreme Court.  That is the final arbiter of the law,” Estrada said. With reports from Michael Lim Ubac and Norman Bordadora

BPO group to Aquino: We are not stupid