BPO group to Aquino: We are not stupid | Inquirer News
Close
menu
search

BPO group to Aquino: We are not stupid 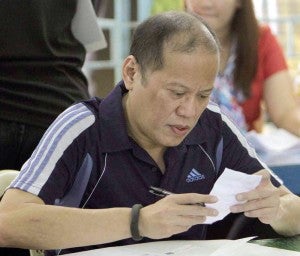 The most telling criticism of President Aquino’s defense of the pork barrel system came from workers in the business process outsourcing (BPO) industry that employs young, educated and tech-savvy Filipinos estimated at nearly a million strong.

“We are not stupid! We are angry, we are disgusted, and we will not allow this to pass,” the BPO Industry Employees Network, or BIEN, said Thursday in a sharp reaction to President Aquino’s 12-minute statement to the nation on Wednesday night.

“The corruption that goes with the pork barrel system has hounded our country since the 1980s. The money that we pay as taxes is being compromised and the President has the gall to tell us that it is not being pocketed,” said BIEN, a call center employee’s organization with some 200 individuals from various BPO firms.

In his address, Aquino declared that he would prosecute those involved in raiding the allocations from the congressional Priority Development Assistance Fund (PDAF), or pork barrel, meant to uplift the countryside and ease the plight of typhoon victims.

The President angrily denounced criticism against his own pork barrel funds—P600 billion proposed for next year for special purposes—and the Disbursement Acceleration program (DAP), a little-known impounding facility for government savings purportedly created in 2011 to pump-prime the economy set back by low infrastructure spending at the outset of his term.

Peachy Rallonza-Bretaña, one of the persons behind the recent pork barrel protests, said: “I think he got hurt by being called the pork barrel king, and that he did not move on. He focused too much on that it became all about him…. It wasn’t what the people wanted to hear.”

The Scrap Pork Network, in a statement, said similar pork barrel controversies could continue unless the system is overhauled, and it cannot be done until the President keeps on defending it.

“We want the vulnerabilities not only plugged but a strong wall put in front of it. We want governance improved and that’s why we want the pork barrel system gone and the Freedom of Information Act in place. We can’t be experiencing this every few years because you are stubbornly defending keeping the pork barrel in place,” it said in a statement.

“We want public service improved that’s why we want public funds to go straight to the departments without being a tool for patronage politics by trapos to maintain their political dynasties.”

Wednesday night’s broadcast marked the first time the Aquino administration demanded from the nation’s networks access for a prime time slot—resorted to in the past by Malacañang to address grave national issues. Then President Gloria Macapagal-Arroyo used this vehicle to say “I am sorry” in the midst of calls for her ouster following allegations she stole the 2004 presidential election.

Aquino’s address came amid public outrage at allegations that Janet Lim-Napoles channeled state funds—from the PDAF and revenues from the Malampaya oil and gas fields off Palawan province—into kickbacks.

The constitutionality of the PDAF and the DAP has been raised in the Supreme Court. A ruling is expected by year’s end.

Three days before the Million People March in August demanding the abolition of the PDAF, Aquino announced that the congressional pork barrel had been abolished. But the high court in hearings last month said that only Congress could scrap the PDAF.

It said the high tribunal could also do this by declaring it unconstitutional.

Following Aquino’s declaration of the death of pork, the House of Representatives shifted next year’s PDAF allocation of P26 billion to six executive departments but retained the power to designate projects for the lawmakers, a point at issue in the Supreme Court cases.

Aquino insisted in his address on Wednesday night that he needed the P600 billion in special funds—lump sum and discretionary—in the General Appropriations Act next year to address such things as natural calamities and the rebuilding of Zamboanga City following the uprising staged by the Moro National Liberation Front last month, among others.

The President said the DAP, which had impounded some P170 billion in government savings since its creation in 2011, had positively contributed to the 7-percent growth of the economy last year, a fact acknowledged by the World Bank, and the investment upgrades the country received from credit-rating agencies paid millions by the state to undertake the analysis.

Budget Secretary Florencio Abad has acknowledged that the DAP was the source of the additional pork from P50 million to P100 million given to 20 senators who voted to convict Chief Just Renato Corona last year for dishonesty in his statement of assets, liabilities and net worth.

Petitioners in the Supreme Court cases claim the President cannot move state savings from one department to another under the Constitution.

BIEN lambasted the President for his failure to prosecute a single corrupt Arroyo official.

“Some of those officials are enjoying your protection after you appointed them as members of your Cabinet. You appointed officials in the Social Security System, Philippine Heath Insurance, Government Service Insurance System and other government-owned and -controlled corporations who continue to enjoy millions of bonuses that come from our hard work, blood, and sweat, and you tell us you are all holy and innocent?” the group said.

“Yes, Mr. President, we are very angry, for you made us look stupid and incapable of thinking. We are employees who pay taxes so that the government can provide social services to the most needy in our society yet you failed to provide even the simplest forms of relief in times of calamities and disasters,” it added.

BIEN was referring to the relief assistance given to the people affected by the recent destructive earthquake in Bohol province.

“[That amount] is incomparable to the amount you spend in useless bonuses and incentives of high officials of different government agencies,” it said. “We have lost confidence in your government to manage our money after you’ve made us look stupid by trying to wash your hands clean of corruption!”

“Mr. Aquino did not say anything new and did not depart from his long-standing defense of the pork barrel, especially presidential pork. He only further showed his desperation to maintain pork,” Kilusang Mayo Uno (KMU) said in a statement.

“It is clear that Mr. Aquino made the speech in response to his dwindling popularity. Despite the feel-good rhetoric and cover-up attempts, it is clear that the Aquino regime remains in panic mode and that Aquino is losing sleep, if not hair, over the people’s mounting anger and protests over the pork barrel,” the KMU added.

The Kilusang Kontrapork said: “You miss the point, Mr. President. Pork is essentially patronage, not only fund misuse…. What we expected from

P-Noy last night was a list of needed reforms in the public finance system of the country, beginning with the elimination of all pork. What we got was a shrouded defense of pork.”