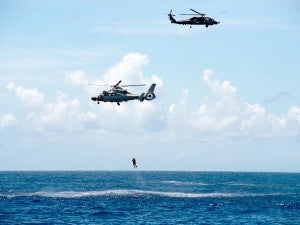 A Chinese People’s Liberation Army-Navy Harbin Z-9 and a US SH-60B Sea Hawk helicopter from the Easy Riders of Helicopter Anti-Submarine Squadron Light (HSL) 37 retrieve a rescue swimmer September 9, 2013 from the water during a search and rescue exercise off the coast of Hawaii. AFP FILE PHOTO/ HO / US NAVY / MC3 Brennan D. Knaresboro

BEIJING–Beijing’s military accused Tokyo of a “highly dangerous provocation” by interfering in Chinese live-fire drills in the Pacific last week, warning that Japanese lives could be at stake, state media reported Friday.

Japanese ships and aircraft tailed Chinese navy vessels conducting the exercise in the western Pacific Ocean, the defense ministry said, according to reports.

“The actions of the Japanese ships and planes not only interfered with our normal exercises but also endangered the safe navigation of Chinese ships and planes, and might lead to misjudgment and accidental injuries,” the state-run China Daily quoted defense ministry spokesman Yang Yujun as saying.

Yang made the comments at the defense ministry’s monthly press briefing, which foreign media are barred from attending.

According to China’s state-run Global Times, the People’s Liberation Army Navy was conducting drills in the western Pacific last Friday when a Japanese warship “broke into the drill zone” and remained in the area for three days.

The ministry had lodged a “solemn representation” over the action, it added.

China gave advance warning through the International Maritime Organization on Oct. 23 of its plans to conduct the drills, the Global Times said.

The furious Chinese response — and implicit threat — marks a further deterioration in the already fraught China-Japan relationship, which has soured in recent years as the two Asian giants exchange tough rhetoric over disputed islands in the East China Sea and Japanese leaders’ visits to a controversial Tokyo war shrine.

The latest escalation comes a week after Beijing’s defense ministry said that any Japanese move to shoot down Chinese drones would amount to an “act of war”.

Also last week, Japanese Prime Minister Shinzo Abe warned China over its maritime activities, saying in a speech to Japan’s Ground Self-Defense Force troops: “We will demonstrate our intention not to allow a change in the status quo.”

“We must conduct surveillance and intelligence activities for that purpose,” Abe said in his address, according to Japan’s Kyodo news service.