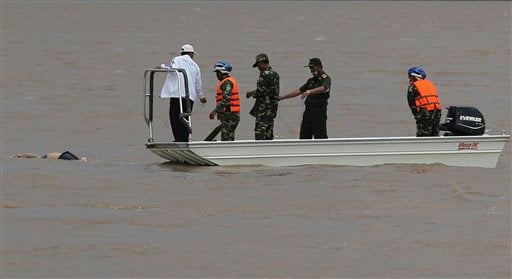 Rescue workers recovers the body of a plane crash victim in the Mekong River in Pakse, Laos Friday, Oct. 18, 2013. Lao Airlines flight QV301 crashed Wednesday as it prepared to land in stormy weather at Pakse Airport in southern Laos. All 49 people on board, more than half of whom were foreigners, are presumed dead. (AP Photo/Sakchai Lalit)

BANGKOK— The flight data recorder from a Lao Airlines plane that crashed last month has been recovered from the Mekong River and the cockpit voice recorder has been located, officials said Friday.

The plane crashed Oct. 16 during a heavy storm as it approached Pakse Airport in southern Laos. It struck a riverbank before plowing into the swift-running Mekong, killing 49 people.

The digital flight data recorder was recovered Thursday, said Yakua Lopangkao, director-general of Laos’ Department of Civil Aviation. He said on Friday that the divers were able to see the cockpit voice recorder but they have not been able to recover it.

He said earlier that the cockpit voice recorder was found but corrected that. He said the confusion was caused by a misreport of officials.

A cockpit voice recorder contains the conversations in the cockpit, while a flight data recorder logs technical data such as the plane’s altitude, speed and route.

Yakua said both devices — commonly known as black boxes — are needed for a thorough investigation.

“To be able to investigate the cause of the crash — whether it was because of technical errors or pilot errors — we need to retrieve the other black box, too,” he said by phone on Thursday. “Once we recover it, the investigation process can speed up.”

Strong currents and deep, muddy water in the Mekong have hampered searchers.

The airline said Wednesday that 47 bodies had been found and 43 had been identified.

Read Next
Revilla may join Senate ‘pork’ probe if it won’t be a ‘kangaroo court’, says lawyer
EDITORS' PICK
Metro Manila’s COVID-19 cases on downward trend, but surge not over — OCTA
House energy committee chair Arroyo bats for cheap electricity
Unleash the photographer in you this World Photography Day with vivo smartphones
Look Through: The fate of impounded stray dogs
Palace warns sugar hoarders after raid on Pampanga warehouse
What to watch out for when selecting a video surveillance solution
MOST READ
LOOK: Miel Pangilinan dazzles in glittery pre-debut shoot
DOJ indicts bank officer in $2.1 billion Wirecard fiasco
PNP bars US legislators’ visit to De Lima due to lack of authority from court
Palace warns sugar hoarders after raid on Pampanga warehouse
Don't miss out on the latest news and information.