Millions honor the dead on All Saints’ Day in Philippines 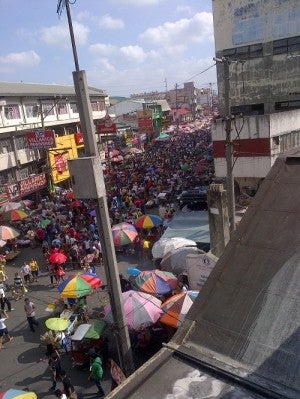 MANILA, Philippines — Millions across the Catholic Philippines trooped to cemeteries to honor their dead in typically festive fashion on All Saints’ Day Friday, ignoring appeals from the Church to keep the day solemn.

Police in the capital Manila were on full alert, as their warnings for the public not to bring alcoholic beverages, loud portable stereos, knives and other deadly weapons to gravesites were largely ignored.

There was heavy security in sea- and airports as well as bus terminals, with many residents of major cities rushing to return home to their villages and provinces for “day of the dead” commemorations.

The Christian tradition dates back to the ancient practice in Rome, which honors all saints and martyrs who died for the faith. All Souls’ Day, the day after, is often when those wanting to avoid the crowds of All Saints’ Day visit the cemeteries to pay their respects.

While the day of the dead is supposed to be solemn, Filipinos use it to plan family gatherings at the tombs, where drinking and even open-air karaoke singing sessions are held.

“It’s like an annual family reunion to remember our departed ones,” said 34-year-old housewife Mary Jane Mendoza, who went to the packed Barangka public cemetery to visit the tomb of her baby, who died last year from pulmonary illness.

“We’ve packed enough for a picnic for the whole day,” she said, as she and her four other children struggled through a maze of narrow pathways.

Barangka is one of several large public cemeteries across Manila. Tens of thousands of people were expected to visit it Friday.

The final resting places there, as in other public cemeteries across Manila, are called “apartment-type tombs” and are stacked on top of one another, reaching several feet high.

Mendoza, whose daughter’s grave is on top, had to make the perilous climb up the structure just to light a candle and say a simple prayer.

The Catholic Church, meanwhile, put up a special website for the millions of Filipino workers abroad who could not come home to visit the graves of their dead.

Found at www.undasonline.com, the site is operated by the country’s bishops and allows those unable to make it home to offer special prayers for their deceased.

Visitors to the site simply have to list the names of their loved ones, and click a “prayer request” button.

Priests in Manila can then say a prayer on their behalf free of charge.

“When we celebrate the day of the dead, we also celebrate life,” said Marcelino Cabrera, a retired shop keeper whose clan erected a sprawling tent in another cemetery.

“We shall sing songs to them,” he said as he sipped gin from a white paper cup.

North Cemetery in Manila fills up for All Saints’ Day