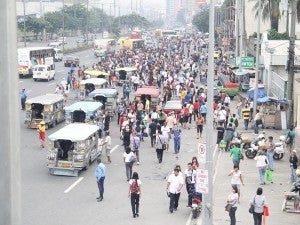 MANILA, Philippines—The Department of Transportation and Communications (DOTC) is prepared for the increased demand on the country’s mass transportation systems during the long All Saints’ Day and All Souls’ Day holiday weekend, Transportation Secretary Joseph Abaya said on Thursday.

The facilities are ready to handle the expected influx of people heading back to their provinces, Abaya said.

The DOTC had been preparing for the holiday, as shown by a document outlining its plans for the Oct. 25 to Nov. 4 period.

It said the DOTC saw higher-than-expected volumes at the airports and seaports while use of the main railway systems would slow as people moved outside the capital.

The DOTC ordered airport officials to augment security measures. It said that adjustments to available manpower should be made to better serve air passengers.

It directed the Civil Aviation Authority of the Philippines to be ready to provide additional seats in and around airport terminal buildings to ensure passenger convenience, as well as “charging stations” for electronic devices.

Operations at the Clark International Airport, where volumes are expected to be higher, may nevertheless be affected by the recent decision of Philippines Air Asia to suspend its Clark flights and to focus on Naia, the DOTC said.

The DOTC said the maritime sector should also be experiencing higher passenger traffic, expected to peak during the weekend after the All Saints’/All Souls’ Day observation.

The DOTC warned that “during high passenger volume seasons, there is a significant rise in petty crime incidents, most commonly estafa and ticket-selling scams at seaports.”

It said passenger should buy tickets only from authorized personnel and deal only with officials wearing the proper uniforms. Passengers should also be aware of extra charges not found on their receipts as this could indicate a scam.