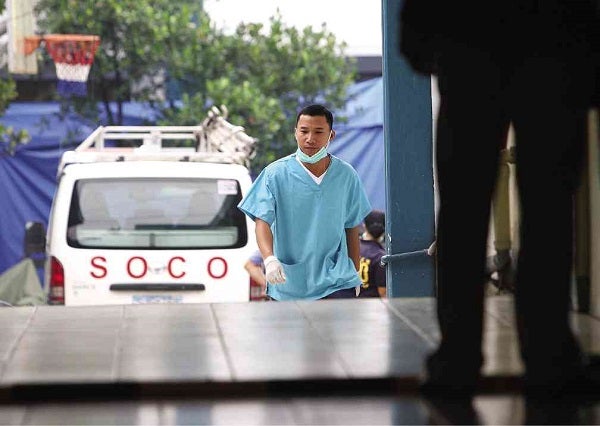 ONE OF THEIR OWN Crime scene investigators based in Camp Crame find a fresh case right in their own headquarters. MARIANNE BERMUDEZ

INSP. Romelou Medina changed her Facebook profile picture early Thursday, with the newly posted photo showing her with husband Nelson. She also replaced the cover photo with the picture of their five young children, taken during an out-of-town trip.

About four hours later, the police officer was found dead inside the main office of the Philippine National Police (PNP) Crime Laboratory inside Camp Crame, Quezon City, with a bullet wound on her right temple. Her service firearm and a bullet casing were found next to the body.

Medina, 35, was in her uniform when found by PO1 Rhea Rebaño, her colleague in the Crime Lab’s finance section, around 7:30 a.m., according to Senior Supt. Wilben Mayor.

“We are still investigating what really happened. As of now, we cannot conclude yet if this was really a case of suicide or not,” said Mayor, spokesperson of PNP chief Director General Alan Purisima.

“The body was found in a sitting position with the back against the wall near the office lavatory. A pool of blood was noticed on the floor near the body,” Senior Supt. Reuben Theodore Sindac, PNP public information office chief, said in a statement.

Medina’s own peers in the Crime Lab and the Criminal Investigation and Detection Group are handling the case.

Mayor said Medina’s husband Nelson, a security guard, rushed to Camp Crame upon learning about her death but had yet to talk to police about the possible reasons why she would take her own life, if it was indeed a suicide.

Chief Supt. Liza Sabong, PNP Crime Lab chief, said she and her people were shocked by Medina’s death, noting that the victim was promoted to police inspector (the equivalent of a lieutenant in the military) only last year.

Medina was undergoing training on crime investigation and was recently assigned to the Crime Lab section of the Manila Police District, Sabong added.

“She rose from the ranks. Even when she was off duty, she usually dropped by the office to finish some paperwork in the finance section,” the officer recalled. “Her death really saddens us, but we have to accept that things like this happen.”

Medina, a resident of Rodriguez, Rizal province, was a mother of five, the youngest being 5 years old.

She joined the PNP as a Police Officer 1 in December 2003, Sabong said.