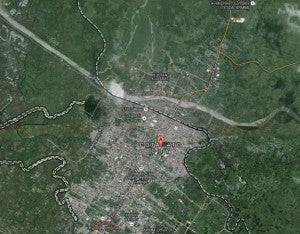 COTABATO CITY, Philippines – An Indian businessman, who escaped from two failed kidnapping attempts in 2007 and 2009, was abducted by a group of still unidentified armed men here on Tuesday evening, the authorities said.

Aniceto Rasalan, speaking for the city government, said escorts of the 60-year-old businessman put up a fight and one of them was killed in a brief firefight with the kidnappers, some of whom were armed with high-powered rifles.

Balquin identified the slain Khemani security escort as Kaura Abdul. Another escort of the businessman’s, identified as Mustapha Abdulrahim, was wounded and taken to a hospital, he said.

The abductors fled toward the Maguindanao side of the Rio Grande de Mindanao and transferred to a motorboat.

Balquin said a police team later recovered the black car used in the kidnapping but lost track of the kidnappers and their victim.

“Witnesses said they saw four of the suspects wearing police uniforms,” he said.

Rasalan said city officials suspected that the victim was taken to the Kabuntalan area, where the notorious Pentagon kidnap gang is believed to have a hideaway.

The Pentagon gang was formed in the 1990s by former Moro commander Faisal Marohomsalic. It operated through cells and continues to be active in such places as Maguindanao, North Cotabato and the Zamboanga peninsula.

It has been blamed for more than two dozen abductions in Mindanao, including that of Italian missionaries and other foreigners.

In Kidapawan City, the local business chamber and city officials condemned the abduction of Khemani, who has a Sugni branch there.

“This incident is not acceptable. We call for his immediate unconditional release,” Kidapawan Mayor Joseph Evangelista said.

Evangelista said the kidnapping has marred the improved image of Central Mindanao.

(With reports from Jeoffrey Maitem and Williamor Magbanua, Inquirer Mindanao)