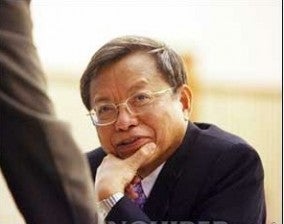 (For me, the case has been filed at the Ombudsman, it is being investigated by the blue ribbon committee and  the  people   are closely monitoring.  So in my view, there’s no basis)

Drilon was  referring to the  plunder  complaints  filed at the   Office of the  Ombudsman  against those  allegedly involved in the  P10 billion “pork barrel” scam, including Senators Juan Ponce-Enrile, Jose “Jinggoy” Estrada and  Ramon “Bong” Revilla Jr.

The  three senators  though have repeatedly denied any involvement  in the scam, allegedly masterminded by detained businesswoman Janet Lim-Napoles.

It was  Puno, who initiated  the  people’s initiative to push for the abolition of the  “pork barrel” system  in government  amid   alleged  abuses   in the   use of the  funds.

Drilon, in the same interview, also dismissed  Puno’s   reported  statement  that former Chief  Justice Renato Corona’s impeachment may  be declared  void  if it would be proven that senators had been   bribed with additional “pork barrel” funds  in exchange of his conviction.

Estrada, in a privilege speech,  claimed that the senators  who voted to impeach Corona were given  additional  “pork barrel” funds. The  senator though  immediately clarified  that  it was not a bribe.

But Drilon said  all  these bribe talks were just rumors.

(To me, all these  talks  of bribery   are just  rumors and there’s no single   document that would show that  it (the additional pork) was a bribe)

Estrada himself, he said,  had claimed that the additional funds released through the Disbursement Acceleration Program,  did not influence  the senators  because  it was released  after Corona’s conviction.