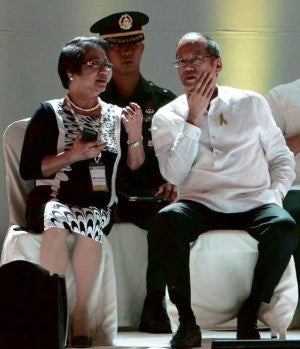 President Aquino will address the nation at prime time on Wednesday night to talk about the controversial Priority Development Assistance Fund (PDAF) and the Disbursement Acceleration Program (DAP), the Inquirer learned on Tuesday.

“DAP and PDAF,” Aquino told the Inquirer at the wake of the father of Inquirer Lifestyle editor Thelma Sioson-San Juan when asked about his speech.

The speech, at least seven pages long and expected to last 10 minutes, was partly prepared by the President.

Interior Secretary Mar Roxas, who was with the President at the wake, also told the Inquirer that the networks had been asked to air the speech.

“Request for the networks had been made,” Roxas said.

The President and Roxas declined to elaborate on the speech.

Aquino, under attack for the controversial DAP disbursements, earlier warned of a conspiracy to attack his administration to muddle the issue of the P10-billion pork barrel scam allegedly perpetrated by Janet Lim-Napoles and several lawmakers.

Last week, the President urged the media to keep their “eyes on the ball.”

He told the Foreign Correspondents Association of the Philippines (Focap) that the attacks came after plunder cases, among other things, were filed in the Office of the Ombudsman against “a few well-known politicians.”

Aquino was apparently referring to Senators Jinggoy Estrada, Juan Ponce Enrile and Bong Revilla, who along with 35 other respondents, were charged with plunder for allegedly taking part in the P10-billion pork barrel scam.

Outraged by the misuse of the PDAF, the public has called for the abolition of the pork barrel. The PDAF is a lump-sum fund that finances pet projects of senators and members of the House of Representatives.

Several petitioners have asked the Supreme Court to declare unconstitutional not only the PDAF but also the DAP.

The President said it was “difficult to fathom how one could equate” the DAP with the PDAF.

He said the DAP, an economic pump-priming program, was being “unjustly and oddly vilified in the media … nearly two years after the same media lauded the government for its resourcefulness.”

The Supreme Court has scheduled oral arguments on Nov. 19 on petitions questioning the constitutionality of the DAP, a little-known mechanism that pools savings of government agencies.

The Department of Budget and Management (DBM) said the P50 million in additional pork barrel funds given to each of the 20 senators who voted to convict Chief Justice Renato Corona in May last year came from the DAP.

The DBM issued the explanation after Estrada disclosed in a privilege speech that “incentives” were given to senators after the conviction of Corona.

Former Sen. Joker Arroyo, Sen. Miriam Defensor-Santiago and constitutional experts like Fr. Joaquin Bernas said the Constitution prohibited the transfer of funds in the General Appropriations Act from one agency to another.