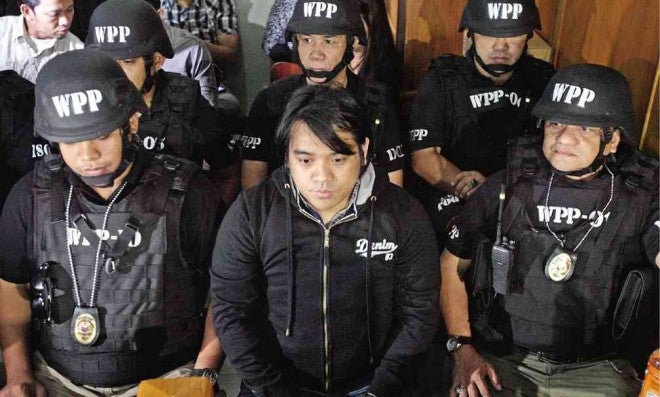 MANILA, Philippines—It took only a photograph of his mother, Gertrudes Luy, to stop him from escaping from his captors, a sobbing Benhur Luy told the court during Friday’s bail hearing on the serious illegal detention case filed against businesswoman Janet Lim-Napoles and her brother Reynald Lim.

Wearing a bulletproof vest and looking far different from his giggling self when he previously appeared in a Senate hearing, the principal whistle-blower in the alleged pork barrel scam that involved Napoles broke down several times when he recounted his ordeal during his alleged detention by the Lims, his former employers.

“Pinagbantaan ako (I received threats) …  I was so afraid something might happen to my family … especially my mother who was still working for Madame Janet if I (tried) to escape,” Luy said, turning emotional.

“The photo of my mother shown to me by Kuya Jojo (Lim) said it all,” he said, adding that Lim left the photo on the table before he went out of the room.

Lim, who has a P5-million bounty on his head, remains at large, while Napoles is being held without bail at Fort Sto. Domingo in Laguna.

Luy’s mother and sister Annabelle who were present in Friday’s hearing at the sala of Judge Elmo Alameda of Makati Regional Trial Court Branch 150, were also crying while Luy narrated the events during the early days of his detention.

He said that on the first night of his detention on Dec. 19, Lim “checked him in” in one of the rooms at Discovery Suites, “without dinner and a phone connection.”

He added that he had only “Skyflakes (crackers) for lunch” which was given to him by Nap Sibayan, a security officer of Napoles who was tasked to guard him.

Luy told the court that Napoles had detained him on suspicion that he had betrayed her and was taking her clients from her.

“Pu…ina mo, Benhur. Ikaw pa na kamag-anak ko ang magta-traydor sa akin. Kaya pala nababawasan ang PDAF dahil sa (Damn you. I never expected you, my kin, of all people to betray me.  hat explains why my PDAF has been decreasing. It’s because of your) hidden transaction (with) senators and congressmen,” Luy quoted Napoles as telling him.

He added that a fuming Napoles then ordered her security officer and brother to detain him.

The whistle-blower also bared new names in connection with his detention, among them lawyer Rocky Delson, another Napoles counsel, Napoles’ brother William Lim, and “Mongsy,” or Msgr. Josefino Ramirez.

Luy said that Lim had also threatened that policemen were going to arrest him, and that they were sent by “angry senators and mayors out to get him because he (had) double crossed her sister.”

The witness said that Lim had told him on several occasions: “Benhur, I am a convicted criminal. I would kill you and your family just for my sister (Napoles).”

From Discovery Suites, Luy said he was transferred on Dec. 20 to Bahay San Jose, a Napoles-owned house in Magallanes Village, Makati City, which was occupied by Ramirez.

Lim had instructed him not to say anything to Ramirez, he added.

Instead, Lim told the monsignor that Luy would be staying in the house under guard because he was being hunted down by “senators and mayors,” the whistle-blower said.

Luy described Ramirez as the celebrant in the JLN Corp.’s first Wednesday Mass and who receives P150,000 as a monthly stipend from Napoles.

On Jan. 9, Luy said he took the chance to talk to Ramirez to appeal for his help in persuading Napoles to set him free.

During that meeting which turned into a confession, the monsignor allegedly told Luy about his suspicion that Napoles and her brother had plans to kill him.

When he managed to corner Ramirez on Feb. 10, Luy said he was told that it would be difficult to untangle the cobweb he was in.

Luy recalled how he spent Christmas and the New Year alone, far from his family in Zamboanga Sibugay.

Luy said his family knew he was being detained at the Magallanes house and that they would eventually come to his rescue.

In fact, he said, he learned from a man guarding him whom he identified as John Rey Mijares that his mother and brother had dropped by at the Magallanes house and asked for his whereabouts.  But that the man had denied he was there.

On the urging of his mother, Luy was rescued by agents of the National Bureau of Investigation from the posh Pacific Plaza Towers in Taguig City.

The rescue led to investigation of the alleged P10-billion Priority Development Assistance Fund (PDAF, also known as pork barrel) scam orchestrated by Napoles in connivance with some lawmakers and their senior officials.

In her manifestation, defense counsel Lorna Kapunan said that it appeared “suspicious” that Luy has remembered all the details line by line.

Judge Alameda reset the continuation of the direct examination on Luy on Oct. 29 and 30.

Luy tells court: I was confined in Catholic retreat house