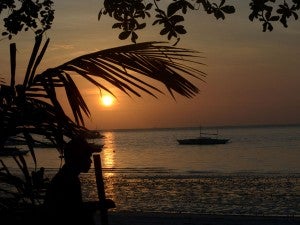 TAGBILARAN CITY, Philippines—The tourist island of Panglao off Bohol province is threatened by oil spill from a cargo vessel that sank in the area 20 years ago and whose wreck might have been shaken by the 7.2-magnitude earthquake that struck Central Visayas last week.

The Philippine Coast Guard estimated that between 60 to 100 liters of diesel had leaked out of the sunken MV Wilcon, causing an oil sheen  50 meters long and 25 meters wide.

The vessel’s wreck lies on the bottom of the sea in 150 m of waters off Panglao, a popular destination for divers and underwater photographers.

The seafloor is believed to have heaved with the force of the Oct. 15 earthquake, disturbing the MV Wilcon’s wreck and rupturing its fuel tank.

Bohol Gov. Edgar Chatto said on Friday that the Coast Guard reported during the meeting of the provincial disaster council on Thursday that the oil spill was first sighted on Oct. 19.

“I told the Coast Guard that it had limited capability to handle this problem. It has to be raised to higher levels so that appropriate remedial measures can be taken,” Chatto told a news conference.

He said he had ordered the Coast Guard in Bohol to determine the extent of the oil spill.

Contacted by the Inquirer on the   phone, Cmdr. Agapito Bibat, commander of the Coast Guard in Bohol, said he and Marine Environment Protection personnel were in waters over the wreck trying to determine the size of the oil spill and what could be done to contain it.

Meanwhile, workers pressed the search for the bodies of people reported missing after the earthquake, especially in Sagbayan town where five children were buried under a landslide in Bayong Falls.

In Balilihan town, two bodies were recovered from the rubble of their homes.

Capt. Omar Wynn Gonato, commanding officer of the 4th Special Forces Company of the Philippine Army, said the bodies were those of Patricio Quinio, 46, and Genaro Manatad, 76, of Cogon village.

As of 8 a.m. Friday, the death toll from the earthquake in Bohol stood at 192.

Structural engineers, together with municipal engineers from the local governments, have begun to check the structural integrity of partially damaged homes in the province.

During a visit to Bohol on Thursday, President Aquino ordered the Department of Public Works and Highways to work with local engineers to assess the damage to homes and see if the owners could return from the evacuation centers.

Chatto said he had also ordered the engineers to check the structural integrity of school buildings to see if they were good for the resumption of classes on Nov. 5.

The Department of Education in the province has reported that 230 schools were destroyed  by the earthquake.

Chatto said the provincial government would look for alternative places for classrooms.

The governor announced the arrival of shelter boxes and tents, saying these were ready for distribution to evacuees.

He said power in the province would be fully restored by Oct. 30.

In Maribojoc, Antequera, Loon and Sagbayan towns, electricity is available only in the town centers.

Chatto said the repacking of relief stocks was going faster, and alternate routes had been found, speeding up delivery of relief to parts of the province that had been isolated by landslides.