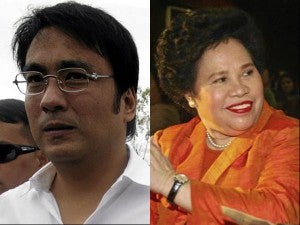 MANILA—Sen. Ramon Revilla Jr. on Friday decried Justice Secretary Leila de Lima’s request to cancel his passport and those of Senators Jinggoy Estrada and Juan Ponce Enrile pending their investigation for plunder by the Ombudsman.

However, their colleague, Sen. Miriam Defensor-Santiago, said the Philippines was obliged to cancel their passports under United Nations conventions regarding corruption.

“The way things are going, I don’t think we can expect fairness. What justice can we expect if the Constitution itself and human rights are set aside?’’ Revilla said in a statement.

“It looks like this administration is hell-bent on decapitating the opposition at all costs –- even if it tramples upon our basic rights enshrined in no less than the Constitution,’’ he said.

De Lima has requested the Department of Foreign Affairs to cancel the passports of the three senators, and 34 other persons included in a plunder complaint in connection with the P10-billion pork barrel scam at the Office of the Ombudsman.

Sen. Jinggoy Estrada, for his part, was unfazed by De Lima’s request.

“As long as there is no court order, I can leave the country. But if I leave the country, I will assure my country I will be coming back and face all the charges. I was born here, raised here, and I will die here,’’ Estrada said by phone. “There’s no other country that I know and that I love except the Philippines.’’

Estrada has a scheduled overseas trip in the coming weeks. But he said he would defer to the Department of Foreign Affairs to decide on De Lima’s request.

Revilla said it was ironic that De Lima, who once headed the Commission on Human Rights, was now disregarding human rights.