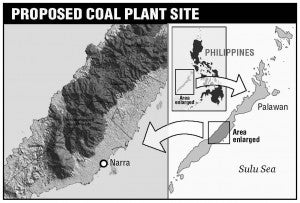 MANILA, Philippines—Palawan can set the standard for fueling development with clean and affordable renewable energy sources instead of dirty and expensive fossil fuel plants, according to the World Wide Fund for Nature (WWF)-Philippines.

WWF-Philippines has launched a campaign called “Seize Your Power” in the province considered the country’s last ecological frontier. The campaign calls on financial institutions, private investors, pension funds and the government to invest in clean energy.

“Palawan can become an example for the rest of the country by veering from outdated, business-as-usual thinking and embracing future practices, particularly the use of locally abundant renewable energy resources,” said WWF-Philippines vice chair and chief executive officer Lory Tan.

The campaign, launched on Tuesday at Mendoza Park in Puerto Princesa City, drew more than 500 representatives from the city and the adjacent towns of Aborlan and Narra.

Palawan was chosen one of the campaign’s iconic places because of its exceptional levels of biodiversity and biological productivity, the group said.

But Palawan’s rich resources are being threatened by a plan to construct a coal-fired power plant in Aborlan, WWF-Philippines said.

Caesar Ventura, the provincial economic affairs adviser, said in a statement that Palawan was being rapidly developed and consequently the need for power was rising.

“We’re just waiting for renewable energy investors to approach so we can finally fund local projects,” he said.

Renewable energy projects like mini-hydropower plants have been proposed for Puerto Princesa, Narra and Aborlan since 2010, according to WWF-Philippines.

But these mini-hydro projects have been unable to obtain contracts with the local electric cooperative.

“Despite obtaining all the other requirements, they have been unable to start generating power for the people of Palawan,” WWF-Philippines said.

“Why should Palaweños buy expensive, dirty energy when cheaper and cleaner alternatives are already available? The extra expense will not just be incurred by Palaweños but by the rest of the country,” Mayo-Anda said.

Under the rules of the National Power Corp.’s Special Power Utilities Group, nongrid-connected areas like Palawan have portions of their electricity cost subsidized by the national government and consumers at large.

Environmentalists in Palawan are opposed to a plan to construct a coal plant in Aborlan, which was initially proposed in Narra but aborted following protests by residents there.

The proposed site in Narra would have directly impacted the Rasa Wildlife Sanctuary, home of the world’s largest nesting population of the critically endangered Katala, or Philippine cockatoo, WWF-Philippines said.

“The proposed coal plant would have impeded the flight path of hundreds of Philippine cockatoos from Rasa island to the mainland, where they fly each morning to forage,” said the Katala Foundation’s Indira Lacerna-Widmann.

“This would have had grave impact on the Katala’s breeding population, putting years of conservation work to protect this iconic species in peril,” she said.

Palawan hosts two Unesco World Heritage Sites—the Tubbataha Reefs and the Puerto Princesa Underground River. The island was also recently named by the tourism industry as one of the best islands in the world.