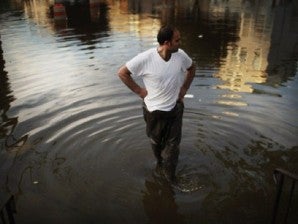 WASHINGTON – US President Barack Obama declared a “major” disaster area in New Jersey and announced plans to visit the flood-hit state on Sunday to view damage wreaked by Hurricane Irene.

Obama’s declaration makes central government funds available to people affected by flooding and other hurricane-related damage in the state, including for temporary housing and home repairs and loans to cover property losses.

The White House said Obama would travel to Paterson, northeastern New Jersey, which has seen the Passaic River rise to record levels after the storm swept the US east coast at the weekend and sent floodwater into the streets.

Thousands remain cut off by flooding in Vermont, New Jersey and upstate New York in the aftermath of Irene, which has now killed nearly 50 people.

Three days after the storm passed, some marooned families are still waiting for the national guard and firefighters to bring food and water to swamped towns.

In other places, rescuers have been ferrying thousands of people – including the elderly, children and babies – to safety in rubber motorboats.

Other senior administration officials have made trips to Connecticut, North Carolina, Vermont, and Virginia.

Officials have reported at least 43 deaths across 11 states, including eight in New York, seven in New Jersey and six in North Carolina, where Irene made landfall Saturday with winds upwards of 85 miles (140 kilometers) an hour.

The hurricane was already responsible for at least five deaths in the Caribbean before it struck the United States, and is being blamed for a 49th fatality in Canada, where the storm finally petered out on Tuesday.