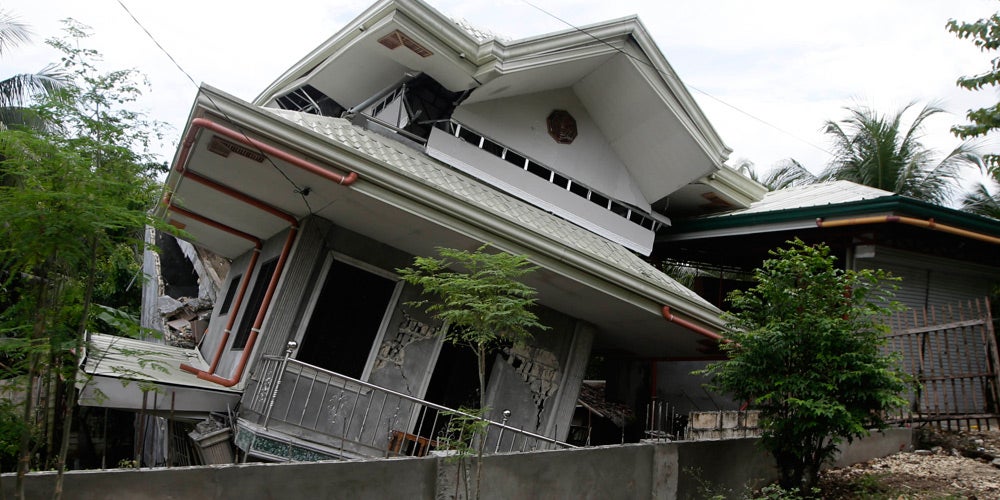 A two-story house leans on its side Thursday Oct.17, 2013, after being damaged by a strong earthquake Tuesday in Maribojoc, Bohol. The death toll in the 7.2-magnitude quake that devastated many areas in the provinces of Bohol and Cebu climbed to 195 on Tuesday, Oct. 22, according to the National Disaster Risk Reduction and Management Council and the Bohol provincial police. AP PHOTO/BULLIT MARQUEZ

MANILA, Philippines—The death toll in the Oct. 15 earthquake that devastated many areas in the provinces of Bohol and Cebu climbed to 195 on Tuesday, according to the National Disaster Risk Reduction and Management Council (NDRRMC) and the Bohol provincial police.

A total of 605 people were reported injured.

Eleven are still missing in Bohol—five in Sagbayan town, two each in Loon and Balilihan towns, and one each in Clarin and Inabanga towns.

Hard-hit Bohol accounted for 182 of the fatalities as authorities received a belated report of five more in Loon on the day the earthquake struck. Relatives brought the five bodies to Tagbilaran City and the towns of Maribojoc and Calape, said Senior Insp. Jacinto Mandal, police chief of Loon.

Since last week, rescuers with picks and shovels have been trying to reach an 82-year-old woman and a 52-year-old man who were buried alive in their house when a landslide occurred in the mountain village of Cantamis Bago in Loon.

A backhoe they had earlier used conked out, Mandal said.

The NDRRMC further reduced the number of people affected by the earthquake to 2.9 million from last week’s 3.5 million and 3 million over the weekend. It did not explain the corrected figures.

A total of 1,282 villages from 52 towns in six Central Visayas provinces were affected, the council said. Nearly 378,000 families have been displaced, while an unspecified number were staying in 104 evacuation centers.—Nikko Dizon