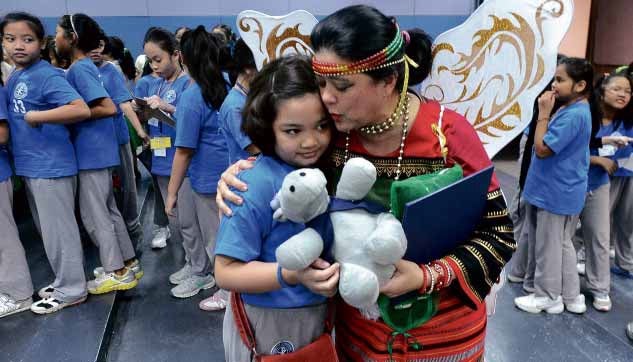 Attended by more than a hundred grade school students of the school, the session was the last stop of this year’s Read-Along Caravan, a series of reading sessions led by Read-Along reading ambassadors in various Metro Manila schools in the run-up to the Read-Along Festival on Nov. 12 and 13 at the Cultural Center of the Philippines.

Romualdez read “Alamat ng Papaya,” written by Rene O. Villanueva and published by Lampara, about a benevolent queen saved by the loyalty of her people.

Abacan kicked off the session with “Si Isem sa Bayang Bawal Tumawa,” which tells of how newcomer Isem transformed into a happier place this kingdom where no one was allowed to laugh.

Rodriguez, who surprised the kids by coming in a Harry Potter costume, capped the session with Adarna House’s “Filemon Mamon” by Christine Bellen, a story about a child who changes his ways to be able to play the role of Andres Bonifacio in a school play.

Romualdez, a returning read-along storyteller, came in full costume as Queen Lingap, the leader of the Pya-a, and gamely answered questions during a special open forum after her reading segment.

“It was fantastic,” said Romualdez, who added that read-along sessions had never failed to showcase the kids’ innocence and general interest in learning. “It reminds us what it was like to be that interested and excited. I was just very happy about the experience.”

During the open forum, Romualdez was asked what got her into reading when she was younger and what she reads now as Inquirer president and CEO.

“When I was younger, I was not very much into reading,” Romualdez admitted. “But when I was around your age, I discovered Nancy Drew, and it was then I started to love reading,” she said, adding that she now preferred reading nonfiction books.

Before the session, Miriam Grade School principal Dr. Gail Reyes-Galang challenged her students to practice their storytelling skills with their families as well: “Whatever you’re able to pick up today—style of reading, facial expressions, gestures—I want you to copy them. Then choose your favorite story at home and tell that story to your brother or sister, or mom or dad.”

“I like the Legend of the Papaya because it was about people who were loyal to their queen,” said Grade 4 student Akemi.

Her schoolmate Steffi, on the other hand, enjoyed Rodriguez’s story. “My classmates thought Kuya Rich was really Harry Potter,” she said. Asked the best lesson she learned, she said: “I learned that you have to read and read to do well in school.”

Launched in May this year, the read-along ambassadors program features celebrities who have pledged to be role models for the youth and to promote love of reading.

Schools interested in sending their students to the Inquirer Read-Along Festival, copresented with the Cultural Center of the Philippines and McDonald’s, may send an e-mail to [email protected] or call Ellen Caparros at 8978808 local 329. Slots are on a first-come, first-served basis.