‘Bling bishop’ called to explain himself to Pope Francis 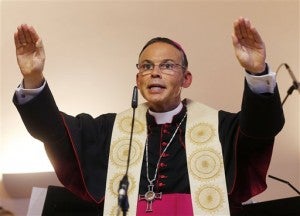 VATICAN CITY — A big-spending German Catholic bishop was called before Pope Francis on Monday, as speculation grows over whether he will be forced to resign for his high-roller lifestyle.

Bishop of Limburg Franz-Peter Tebartz-van Elst, dubbed the “bling bishop” by the press for his extravagances, was received by the pontiff after a tense week’s wait in Rome.

A Vatican statement confirmed the audience but did not offer any further details.

Tebartz-van Elst hit the headlines following accusations he took a business-class ticket on a trip to India and squandered money on luxuries.

His private quarters in a brand-new bishop’s palace are reported to have cost about 2.9 million euros ($3.9 million) and included a 63-square-meter dining room and a 15,000-euro bathtub.

Religious observers have speculated that humility advocate Francis, who has called for “a poor Church for the poor”, may decide to make an example out of Tebartz-van Elst, forcing him to resign.

A decision is not expected to be taken until Zollitsch has filed a report the Vatican has requested on the scandal.

The 53-year-old bishop is under pressure to resign after using church funds to build himself the new diocese headquarters, which also include a museum, conference halls and a chapel.

The ostentatious project in the ancient town of Limburg was approved by his predecessor and was initially valued at 5.5 million euros, but the final bill ballooned to 31 million euros.