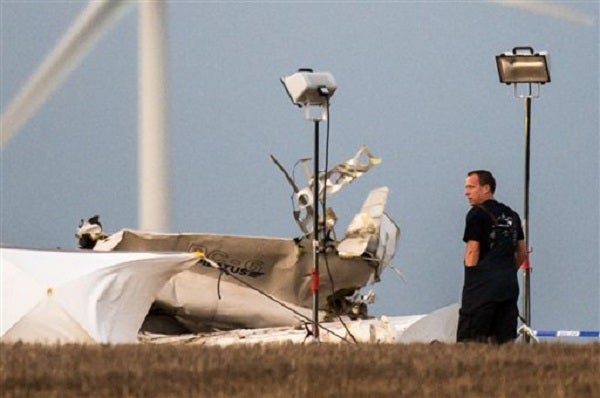 BRUSSELS — A plane carrying parachutists planning to celebrate a birthday with a skydive crashed in Belgium on Saturday, killing all 11 people aboard.

Minutes after the aircraft took off from a small airfield near the city of Namur, witnesses saw part of a wing break off, sending the plane into a spiraling nosedive and crash in a field close to Fernelmont town, said its mayor, Jean-Claude Nihoul. The skydivers and their instructors “were not able to jump out,” Nihoul said in a telephone interview.

“It has been a long time we have suffered a tragedy of such kind,” said Prime Minister Elio Di Rupo, who traveled to the site of the accident.

The victims were almost all between the ages of 20 and 40, and many families lost a father, Nihoul said. “There were 11 on board, and the trip was a birthday present for one of them,” he added.

Everyone aboard was killed and no one was hurt on the ground, Nihoul said, adding that three parachutes were found near the crash site. “Some were trying to get out but could not,” he said.

The 11 victims were not immediately identified by name, and the cause of the accident was being investigated.

The Pilatus PC-6 Turbo Porter plane took off in partly cloudy conditions over the wooded and hilly area about 40 miles (60 kilometers) south of Brussels.

Nicolas Hormans of the Paraclub Namur, whose skydivers were among the victims, told RTL network that the plane was probably about 3 kilometers (2 miles) high when it suddenly went down. He said the nosedive would have thrown everyone aboard around with such force that they would not have been able to jump out and parachute to safety.

Such plane crashes in Belgium, a small country of 11 million people, are fairly rare.

King Phillipe was visiting the scene of the accident Saturday night with Prime Minister Di Rupo.