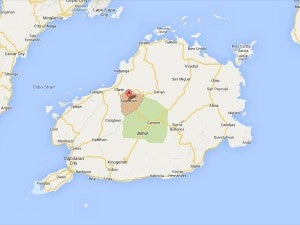 Twenty-two people remain missing in Bohol province, including five children who were playing by a waterfall when a 7.2-magnitude earthquake struck the island on Tuesday morning.

Reports said the children were believed to be buried under a landslide that obliterated the waterfall in a remote part of Sagbayan town.

Authorities identified the children as Jonalyn Somoro, 13, and her sister, Joellene, 11; Jess Marvin Empinado, 10, and his sister, Meme Jane, 9; and their friend, Reynaldo Sipsip, 15.

Senior Supt. Dennis Agustin, Bohol police commander, said it was unlikely that many of the missing would be found alive.

“It looks doubtful. This is the fourth day since the quake. It is an extreme possibility they will be recovered alive,” he said.

“Some are believed buried under landslides, some are under fallen structures. We will likely get more reports of deaths,” he said.

The death toll from the earthquake rose to 173 on Friday as authorities warned it would probably climb even higher.

Bohol, which was the epicenter of the earthquake, suffered the most with 161 people dead, the regional civil defense office said.

The death toll in the province stood at 160 on Thursday until rescuers recovered a body from the rubble of the 180-year-old Our Lady of Light Parish Church early Friday.

Officials said the body remained unidentified and had yet to be determined whether male or female.

Another body was found in Cebu, bringing the death toll in the province to 12, the officials said.

The unidentified body was from Toledo City. No information on the cause of death was available.

It was the first death in Toledo to be reported. The other dead were from Pinamungajan, one; Talisay City, one; Cebu City, five; and Mandaue City, two.

The Bohol police also said there were 315 reported injured in the province.

In Manila, the National Disaster Risk Reduction and Management Council (NDRRMC) said 498 people were injured in the earthquake—Bohol, 311; Cebu, 182; Siquijor, three, Negros Oriental, one; and Iloilo, one.

“We admire the resiliency of the people of Bohol, with the world-famous Loboc Children’s Choir still singing in front of the damaged Loboc Church,” said Romeo Fajardo, deputy executive director of the council.

“But [the people of Bohol] still need food, medicine, water and shelter as they are still out in the open,” Fajardo added.

Rescuers from the Metropolitan Manila Development Authority (MMDA) on Friday rescued 63 residents of Tanawan in Loon who were trapped by landslides in their mountain village.

Mayor said he had heard about a group of people who were trapped in the mountains of Tanawan, about 7 kilometers from Loon. They could not go down from their village because the roads were blocked by landslides and the ravines were 200 meters deep, he said.

With the help of a local guide, the MMDA rescuers hacked their way up the mountain, tying ropes to trees as they climbed to find their way back down.

It took the rescuers three hours to reach the mountain village.

The villagers cheered when they saw the rescuers.

“We had been waiting for them to arrive after we were told that we would be rescued. On Thursday, somebody said a chopper would come and get us, but no one arrived,” resident Manilyn Mandresa, 19, said.

“When we saw [the rescuers], we all shouted for joy,” she told the Inquirer yesterday.

Mayor said he and his companions felt like celebrities as the villagers welcomed them.

“My hand ached from signing autographs,” he said.

It took the rescuers and the villagers three hours to go down the mountain.

The villagers were taken to an evacuation center in Tanawan, all saying they were relieved to be on safer ground. With a report from AFP