Teen found with fetus in bag at store 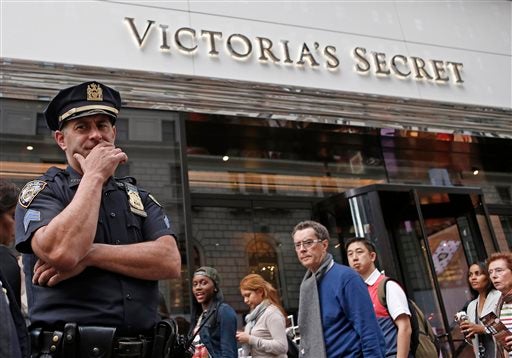 A New York City police officer stands in front of the Victoria’s Secret Herald Square store in midtown Manhattan, Thursday, Oct. 17, 2013, in New York. A security guard on the lookout for shoplifters searched two teenage girls as they left the lingerie shop Thursday afternoon, and discovered one of them was carrying what appeared to be a fetus in her bag, police said. (AP Photo/Kathy Willens)

NEW YORK—A security guard on the lookout for shoplifters searched two teenage girls as they left a Manhattan lingerie shop Thursday afternoon and discovered one of them was carrying a fetus in her bag, police said.

The 17-year-old girls were shopping at a Victoria’s Secret store in midtown Manhattan, said police, who were called to the scene after a guard noticed a strong odor coming from one of the bags and found the fetus. One of the girls told detectives she was carrying the human remains because she had delivered a day earlier and didn’t know what to do, authorities said. It wasn’t clear whether the fetus was alive or dead when delivered.

The girls were arrested on charges of petit larceny and criminal possession of stolen property, police said. The teen thought to have given birth was hospitalized, and the other was questioned by police. The medical examiner’s office was performing an autopsy on the remains. More serious charges could follow, depending on the cause of death.

The person who answered the phone at the home of the girl believed to have given birth had no comment. No phone number was available at the address provided by police for the second teen.

The store remained open for business and was filled with customers from around the world. An NYPD crime scene unit spent a few hours gathering evidence inside the store before leaving shortly before 5 p.m. A single marked police car remained at the front entrance that faces Herald Square at 34th Street.