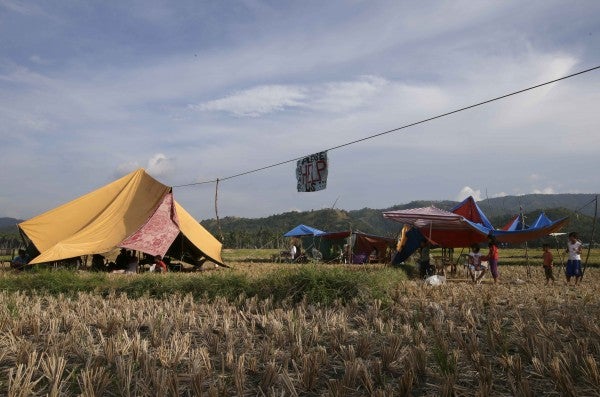 People display a message “Please Help Us” as they camp out in the middle of a rice field to avoid aftershocks at Calape township, Bohol province in central Philippines, Wednesday Oct. 16, 2013.

MANILA, Philippines—The number of people killed in the 7.2-magnitude earthquake in Bohol and other areas in Central Visayas rose to 159 Thursday afternoon, police said.

In a text advisory at around 3 p.m., Police Chief Superintendent Danilo Constantino, Police Regional Office 7 director, said that of the total number of fatalities, 149 were from Bohol, nine in Cebu and one in Siquijor.

The number of the injured, meanwhile, was placed at 302.

Earlier reports quoting the National Disaster Risk Reduction and Management Council said, however, that the number of fatalities stood at148. It listed 374 injured victims.

For his part, Interior Secretary Manuel Roxas II said in a radio interview that President Benigno Aquino III wanted concerned authorities to ensure that assistance will be extended to families affected by the quake.

(Yesterday the President wanted to ensure that there are enough food and medicines for quake victims.)

He also said engineers from the Department of Public Works and Highways and Philippine Association of Structural Engineers and Civil Engineers have been sent to check the structural integrity of all establishments in Bohol, especially establishments being used by evacuees such as hospitals, gymnasiums, schools, and evacuation centers, among others.