4 arrested as over 300 homes demolished in Quezon City

MANILA, Philippines – Authorities demolished over 300 houses in Barangay (village) Old Balara, Quezon City around noon Wednesday despite resistance from residents that led to a brief outbreak of violence and the arrest of four people, a report on 990AM said.

The demolition of 350 homes belonging to informal settlers on a one-hectare property of Madrigal-owned Susana Realty Inc. along Commonwealth Avenue occurred after negotiations between the lawyers of the real estate company and the residents failed. 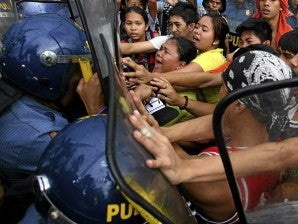 Informal settlers clash with police as authorities tried to implement a court order to demolish shanties in at Old Balara along Commonwealth Avenue in Quezon City. INQUIRER/ MARIANNE BERMUDEZ

Quezon City Mayor Herbert Bautista also intervened during the negotiations and requested for a five-day reprieve but this was denied, the report said.

Earlier on Wednesday, the Quezon City Police District sent around 150 additional policemen to the site as some residents continued to resist authorities, resulting in the arrest of four.

One of those arrested, Jason Celso, was hit on the head with a wooden club although he and a certain Ricky, who was identified as Celso’s cousin and who was also arrested, claimed that they were merely trying to break apart the brawling policemen and residents, the report said.

Meanwhile, representatives from the Commission on Human Rights have arrived at the scene to monitor the conduct of policemen and the demolition teams, the report said. Kate Evangelista, INQUIRER.net