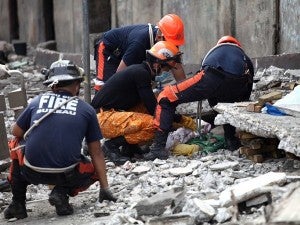 Rescuers try to uncover an unidentified man under slabs of cement in Cebu City, Philippines after a major 7.1. AFP

CEBU, Philippines  — The death toll from a 7.2-magnitude earthquake that struck Bohol, Cebu and other parts of the Visayas and Mindanao reached 110 Wednesday with only three people pulled alive from rubble.

The three were rescued in nearby Cebu province hours after Tuesday’s quake shattered office buildings and homes and caused many centuries-old churches to crumble.

There seems little hope of finding any large number of survivors from beneath the rubble of leveled buildings, homes and churches.

The small coastal town of Loon reported 20 fatalities, the highest in Bohol, including those buried in a hospital and a church.

Many roads and bridges were damaged, making rescue operations difficult. But historic churches dating from the Spanish colonial period suffered the most. The country’s oldest, the 16th-century Basilica of the Holy Child in Cebu, lost its bell tower.

Nearly half of a 17th-century limestone church in Loboc town, southwest of Carmen, was reduced to rubble, as was the largest church on the island in Loon town, where three worshippers were buried alive.

The entire province was without electricity after the quake cut power supplies.

Authorities set up tents for those displaced by the quake, while others who lost their homes moved in with their relatives, Bohol Gov. Edgardo Chatto said.

Extensive damage also hit densely populated Cebu city, across a narrow strait from Bohol, causing deaths when a building in the port and the roof of a market area collapsed.

The quake set off two stampedes in nearby cities. When it struck, people gathered in a gym in Cebu rushed outside in a panic, crushing five people to death and injuring eight others, said Neil Sanchez, provincial disaster management officer.

“We ran out of the building, and outside, we hugged trees because the tremors were so strong,” said Vilma Yorong, a provincial government employee in Bohol.

“When the shaking stopped, I ran to the street and there I saw several injured people. Some were saying their church has collapsed,” she told The Associated Press by phone.

Offices and schools were closed for a national holiday — the Muslim festival of Eid al-Adha — which may have saved lives.

Aledel Cuizon said the quake that caught her in her bedroom sounded like “a huge truck that was approaching and the rumbling sound grew louder as it got closer.”

She and her neighbors ran outside, where she saw concrete electric poles “swaying like coconut trees.” It lasted 15-20 seconds, she said.

Cebu province, about 570 kilometers (350 miles) south of Manila, has a population of more than 2.6 million people. Cebu is the second largest city after Manila. Nearby Bohol has 1.2 million people and is popular among foreigners because of its beach and island resorts and famed Chocolate Hills.

The Philippine archipelago is located in the Pacific “Ring of Fire,” where earthquakes and volcanic activity are common. A magnitude-7.7 quake killed nearly 2,000 people on the northern island of Luzon in 1990.