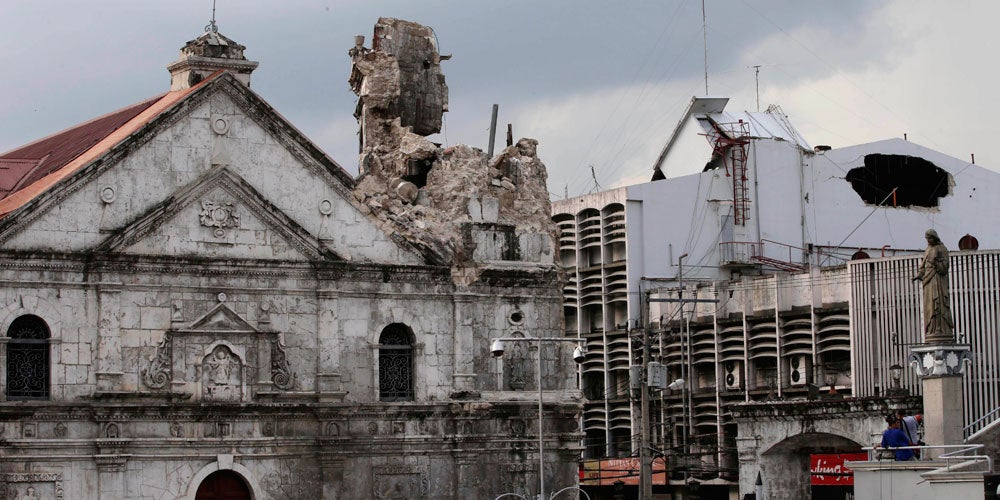 The Basilica De Sto. Nino (Basilica of the Holy Child) in Cebu City is seen with its bell tower gone following a 7.2-magnitude earthquake that hit Bohol and was felt as Intensity VI in Cebu city in central Philippines Tuesday Oct. 15, 2013. AP PHOTO/BULLIT MARQUEZ

MANILA, Philippines—The Philippines lies in the Pacific Ring of Fire, a chain of islands that are prone to quakes and volcanic eruptions. 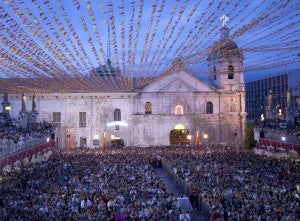 A January 2011 file photo of the facade of Basilica de Sto. Nino with its bell tower in Cebu city in central Philippines. The Tuesday earthquake toppled the bell tower of the Philippines’ oldest church. AP PHOTO/CHESTER BALDICANTOS

Intensity II was felt in Tacurong City; Nabas and Libertad towns in Aklan; as well as Carrascal, Surigao del Sur, while Intensity I was felt in Lezo town in Aklan.

The Philippine Institute of Volcanology and Seismology (Phivolcs) described an Intensity VII tremor as destructive in which most people are frightened and run outdoors.

The agency defines liquefaction as a process where loose saturated sand loses strength during an earthquake and behaves like liquid.

Earthquakes measured at 7 to 8 magnitude are considered major earthquakes and can cause considerable damage near the epicenter.

Shallow-seated or near-surface major earthquakes, when they occur under the sea, may generate tsunamis.

Phivolcs Director Renato Solidum told the Inquirer that the last strong earthquake recorded in Bohol was on Feb. 8, 1990, which was measured at 6.8 magnitude and its epicenter located 17 kilometers east of Tagbilaran City.

Phivolcs records showed the quake caused “ground fissures, landslides, rockfalls, ground subsidence and collapse, sand or mud fountaining and sudden increase on the sea level. Most of the manifestations were particularly observed and experienced by the towns of Jagna, Valencia, Duero, Guindulman and Garcia Hernandez.

“The force of the incoming waves from the sea caused Alijuan River in Duero to flow inland immediately after the earthquake.”