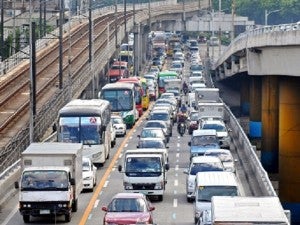 In cyberspace, at least, there is no shortage of “solutions” for commuters dealing with Metro Manila’s daily traffic jams. And the smartphone may be their best chance at finding the easiest way around those bottlenecks and gridlocks.

This was the idea behind the winning entry in a World Bank-supported competition for traffic-related mobile applications or “apps,” which was launched in July by the Metropolitan Manila Development Authority, the Department of Transportation and Communications, and the Cebu City government.

Trip Barker, a community-based app that helps Metro Manila commuters beat the traffic while allowing them to report incidents like accidents and floods for the benefit of other users, beat nine other finalists Monday night in the first Philippine Transit App Challenge.

The contest, which drew a total of 17 participants, required developers to create apps based on two kinds of publicly available data: The regularly updated geographic location and service information for all bus, jeepney and rail routes in Metro Manila, as well as live traffic data streams in Manila and Cebu.

If some areas are flooded or paralyzed by heavy traffic, users can share the information with the rest of the community. A Trip Barker user can also post points of interest, like his or her favorite restaurant along a certain route, which other users can track.

Trip Barker can be found at http://appcircus.com/apps/trip-barker-3.

The winning app bested nine other finalists, some of which focused on a specific mass transport system, like in the case of the Manila Train Guide app (http://appcircus.com/apps/manila-train-guide-1).

There was also Viaje (http://appcircus.com/apps/viaje-2), an Android application that can calculate the cost of commuting to any destination in Metro Manila.

Other groups developed novel concepts like Rklamo (http://appcircus.com/apps/rklamo-2), which provides a platform for tipping jeepney drivers “for good driving behavior.”

“We want to do this more often,” Transportation Secretary Joseph Abaya said following Monday’s awarding ceremonies. “It doesn’t cost [the government] that much and it really brings out our creative juices while doing the public good.”

The contest was a three-month “hack-at-home” event—a trend in the information technology (IT) community where software developers create apps using the same datasets provided to them.

For this project, the DOTC opened up a database on bus, train, and jeepney routes in Metro Manila, called the Philippine Transit Information Service.

“We are happy with the quality of the apps,” said Holly Krambeck of World Bank’s East Asia and Pacific Unit.

“The World Bank has also done the Transit App Challenge in Cairo. The level of participation here is much higher because their (Egyptian) government did not provide any data. In terms of providing this type of data, for sure this is a first in all of Asia,” she said.

“The idea is that the more applications there are and the more people use the data on a daily basis, the more likely these government agencies will maintain and support these services,” she said.