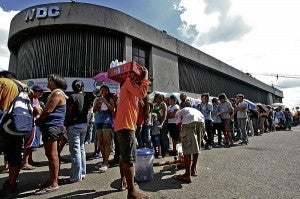 DIGOS CITY, Davao del Sur, Philippines—Nearly 1.5 million voters in Davao del Sur will also be voting for or against the creation of a new province to be called Davao Occidental when they go to the polls later this month to elect barangay heads and council members.

The plebiscite on the creation of the new province—to be made up of the towns that currently comprise Davao del Sur’s second congressional district, namely, Sarangani, Jose Abad Santos, Don Marcelino, Malita, and Sta. Maria—will be held along with the barangay elections on Oct. 28. Two other towns in the second congressional district, Malalag and Sulop, chose to stay out of the proposed new province.

The Commission on Elections said that under Republic Act 10360, voters in the other towns of Davao del Sur — Digos City, Padada, Matanao, Bansalan, Magsaysay, Sta. Cruz, Hagonoy, Kiblawan, Sulop, and Malalag—will also be voting in the plebiscite.

Maria Febes Barlaan, provincial election supervisor, said candidates for barangay positions will have to include the issue of the proposed new province in their campaign.

Barlaan said the Comelec is allowing government employees, except those in the Comelec, to campaign on their personal capacity for or against the creation of Davao Occidental. But they are still barred from campaigning for or against barangay candidates, she said.

The barangay, which may range from a neighborhood in a town or city or a distinct village, is the smallest political unit in the Philippines, next to a municipality.

A special ballot for the dual-purpose balloting will be utilized in Davao del Sur on Oct. 28, she said.

Barlaan said that like their counterparts in other parts of the country, Davao del Sur teachers who will serve as members of the boards of election inspectors will be paid P4,000 but won’t get anything extra for the plebiscite. Support staff will get P1,500 for their services.

Barlaan said that because of the large number of teachers needed for the barangay elections and the plebiscite the Comelec might have to tap teachers in private schools provided they are registered voters in the province.

The military said that while they are expected to be generally peaceful, 38 barangays in the province have been included on a list of areas of “immediate concern” due to intense political rivalry and the presence of communist rebels.

Col. Marcos Norman Flores Jr., commanding officer of the 1002nd Infantry Brigade, did not identify these villages but said soldiers have been deployed there.

Davao del Sur Gov. Claude Bautista said he was optimistic that no violence would mar the barangay elections and the plebiscite.

He said he was confident of the voters’ approval of the creation of Davao Occidental.

“The people know this the best way to boost infrastructure and economic development in both provinces,” he said.

Meanwhile, Wilhelm Suyko, regional director of the Department of the Interior and Lical Government in southern Mindanao, said the DILG will assist the officers-in-charge to be appointed by the President to run the new province in the event its creation wins approval.

Under the law creating Davao Occidental, its first set of elected officials will be chosen only during the 2016 elections.