‘Santi’ leaves behind billions in damage, losses in C. Luzon 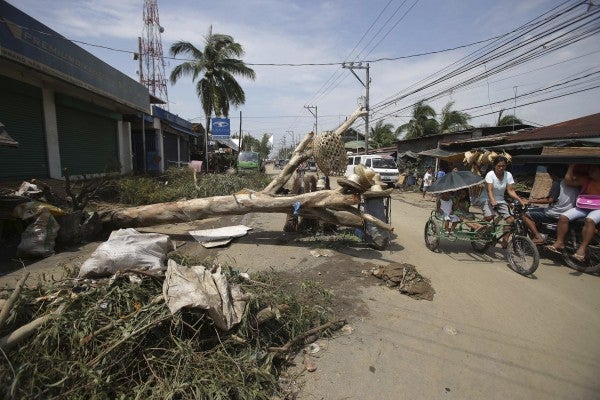 TARLAC CITY, Philippines—Restoring power and clearing roads of fallen trees and electric posts became the top priority of local officials of Tarlac and Nueva Ecija following the onslaught of Typhoon “Santi” on Saturday.

But officials expressed more concern about the long-term impact of the devastation wrought by the typhoon on rice farms and infrastructure and facilities that were either damaged or destroyed by the strong winds and rain.

Reports from the Regional Disaster Risk Reduction and Management Council showed the death toll from the storm remaining at 13, with 33 people hurt by fallen trees and electric posts.

Three people, including two children, died from typhoon-related incidents in Concepcion and Capas towns in Tarlac.

Two days after the typhoon left the country, the council said several villages in Lubao and Guagua towns in Pampanga and in Obando, Bulacan, were still flooded.

The NDRRMC said 6,561 persons were staying at 42 evacuation centers while close to 90,000 victims were being served in the Ilocos, Cagayan Valley, Central Luzon and Calabarzon regions.

In Aurora and Nueva Ecija alone, the council said the typhoon destroyed more than P2.9 billion worth of crops and other agricultural products, while the Department of Agriculture (DA) put the figure at P2 billion worth of palay rendered worthless in Central Luzon.

DA Undersecretary Dante S. Delima said that as of Sunday, DA monitoring found a total of 248,000 hectares of riceland affected by the typhoon, with Nueva Ecija as the worst hit, with 160,000 hectares of palay farms ravaged.

Tarlac Gov. Victor Yap said the rehabilitation of rice farms and the regreening of the province would follow after the cleanup and when electricity is restored.

Initial assessment showed that the province lost P6.9-million worth of crops, Yap said, adding that many areas in the province’s 17 towns and one city remained without electricity three days after the typhoon struck.

The governor said the towns of Bamban, Capas, Concepcion, Gerona, La Paz, Mayantoc, Moncada, Paniqui, Pura, Ramos, San Jose and Sta. Ignacia and Tarlac City suffered the heaviest damage and losses, with the towns of La Paz and Capas being the hardest hit.

The provincial government and the Philippine Red Cross have appealed for chainsaws and other equipment to speed up the clearing of trees from major thoroughfares and barangay roads.—With reports from Jo Martinez-Clemente, Anselmo Roque and Tonette Orejas, Inquirer Central Luzon; Marlon Ramos and Ronnel W. Domingo