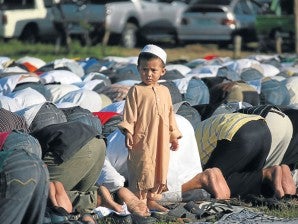 END OF RAMADAN A boy looks confused while adults pray, celebrating the start of Eid’l Fitr in Davao City. The 3-day fest, which begins after the sighting of a new crescent moon, marks the end of the fasting month of Ramadan, during which devout Muslims abstain from food, drink, smoking and sex from dawn to dusk. KARLOS MANLUPIG/CONTRIBUTOR

Gun bursts and prayers greeted the end of the fasting holy month of Ramadan by Muslims on Tuesday throughout the country. It was also a national holiday.

In the festival known as Eid’l Fitr, Muslims are reminded that doing good and right is how Allah wants us to live on earth, according to Ustadz Jaafar Ali of the National Ulama Council of the Philippines.

Despite an earlier appeal by Jaafar Ali not to fire guns, short bursts began to resound as early as 6:30 p.m. on Monday and by 4 a.m. Tuesday, steady firing could be heard in numerous areas of Muslim Mindanao.

“The money you spend for bullets may be given to the needy in terms of food or shelter,” Ali had advised Muslims.

A check of government hospitals, however, did not show any victims of stray bullets, unlike in previous years.

In Metro Manila, the sense of communal celebration was prevalent on Globo de Oro Street in Quiapo as thousands of Muslims trooped to the Manila Golden Mosque Cultural Center on Tuesday to mark Eid’l Fitr.

The mosque saw worshippers dressed in their traditional best: Men in sarongs tied at the waist, women in colorful shawls covering their heads, little girls in dresses and little boys under batik caps, skipping across the compound.

Banners from politicos lined the way to the mosque. “Eid Mubarak!” read the tarps from the city government, a city councilor and Vice President Jejomar Binay.

Muslims from all over Metro Manila started streaming into the mosque as early as 6 a.m. for the hour-long Eid’l Fitr salah or prayers.

Baulo estimated there may have been 10,000 worshippers on Tuesday morning. The mosque, established in 1976, is one of the largest in the National Capital Region. Baulo said some four million Muslims and 300 mosques can be found in Metro Manila.

Thousands of pilgrims also trooped to the Quirino Grandstand at Rizal Park to say the Eid prayers. Traditionally after a heavy breakfast, Muslims are obligated to either say the Eid prayers in a mosque or any space that can accommodate communal worship.

The Eid sermon urged the pilgrims to continue embodying the Islamic values they absorbed during the 30-day Ramadan fasting, meditation and studying of the Quran.

Baulo specially urged Muslims to remain obedient to Allah’s teachings. “What is ordered or forbidden by Allah should be obeyed, because it is what is good for us,” he said in Filipino.

After the morning prayers, Muslims are encouraged to ask for forgiveness from those they may have wronged, Baulo said. Most prepare food for communal feasting or give gifts to their families.

“It’s a major occasion, everyone one in the family should be in, all should go to mosque, every one is required to be in their best attire. After the mosque, we visit our families where there is food to share and even a sort of ’aguinaldo’ for the kids,” said Amir S. Mawallil, 22, of the Young Moro Professionals Network in Western Mindanao, in an online interview.

Though some may have nothing to give, there should be a “spirit of giving and sharing” during Eid’l Fitr, Mawallil explained.

“As we celebrate Eid’l Fitr, let us also not forget to continue to pray for peace in Mindanao, for our nation’s healing, that peace someday will be within our reach,” Mawallil added. Jaymee T. Gamil, DJ Yap, Dona Pazzibugan, and Edwin Fernandez, Inquirer Mindanao