Philippines cleans up after Typhoon ‘Santi’ 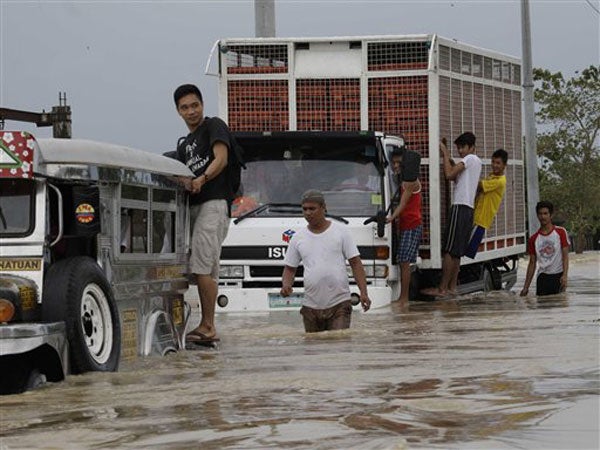 MANILA  — A major clean-up operation was under way in the Philippines on Sunday after Typhoon “Santi”  (international name Nari) pounded the archipelago’s north, leaving 13 dead, as authorities issued a storm warning for the east of the country.

The military, along with civilian relief workers, struggled to clear roads of toppled trees and power pylons as they rushed to restore vital lifelines wrecked by Saturday’s storm.

“The general situation is getting better, but it would take some time to clear the roads of fallen trees and (electrical) posts,” civil defence office spokesman Reynaldo Balido told AFP.

He said power and telecommunication facilities had been restored in affected areas, although some cities and towns in five provinces on Luzon, the country’s most populous island, were without electricity.

Typhoon Santi, the 19th storm to hit the disaster-prone country, tore into the country’s northeast coast early Saturday and cut a westward path through the farming regions of Luzon.

Thirteen people were killed as the storm ripped off roofs of homes and buildings, toppling trees and triggering flash floods and landslides before blowing away into the  West Philippine Sea.

The National Disaster Risk Reduction and Management Council said Sunday morning that some agricultural areas remained inundated, although the waters were subsiding.

“The sun is already out, and we should be able to normalize in a few days,” Balido said.

Many of the more than 43,000 people displaced by the storm had also begun returning home as the government lifted all storm warnings there, he said.

However, the state weather bureau issued a warning for the country’s east. It said Tropical Storm Wipha was 1,460 kilometers (900 miles) away and could reach Philippine seas by Monday.

The bureau added that Wipha was expected to move northward and not directly hit the Philippines but Balido said authorities were not taking any chances.

“We will remain on alert, and continue to take precautions,” he said.

The Philippines are hit by some 20 typhoons each year.

Read Next
Wind, rain pound India as massive cyclone hits
EDITORS' PICK
Unleash the photographer in you this World Photography Day with vivo smartphones
What to watch out for when selecting a video surveillance solution
Look Through: The fate of impounded stray dogs
House energy committee chair Arroyo bats for cheap electricity
Palace warns sugar hoarders after raid on Pampanga warehouse
Metro Manila’s COVID-19 cases on downward trend, but surge not over — OCTA
MOST READ
LOOK: Miel Pangilinan dazzles in glittery pre-debut shoot
Remains of two children found in suitcases auctioned in New Zealand
Alice Dixson to critics of her yellow gown at GMA Gala: ‘’Wag masyadong judgmental’
Palace warns sugar hoarders after raid on Pampanga warehouse
Don't miss out on the latest news and information.