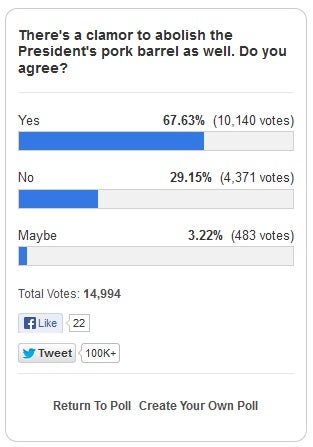 The question posted was, “There’s a clamor to abolish the President’s pork barrel as well. Do you agree?”

Those who clicked the “Maybe” button totaled to 3.22 percent or 483 votes.

The President’s Social Fund has been regarded by critics of Malacañang as President Aquino’s pork barrel.

PSF is sourced from the Philippine Amusement and Gaming Corporation (Pagcor). Based on earlier INQUIRER reports, PSF in 2012 amounted to P2.028 billion.

This year, documents from Pagcor revealed the President’s pork is pegged at P2.25 billion.

Read Next
PNP forms tracker teams to hunt Misuari
EDITORS' PICK
A tribe under threat: Dumagat vs dams
Welcome the next imagery master with vivo X70 co-engineered with Zeiss
COVID-19 cases may peak by October — DOH
An innovative, fun shopping experience AllDay
97 areas in PH under Alert Level 4 — DOH
Watch live performances by ITZY, Mamamoo and other K-pop stars on Smart’s GigaPlay App
MOST READ
Roque not surprised by opposition to ILC nomination: They do not wish anyone to succeed
Son of prominent businessman nabbed in La Union for cocaine possession
Declaration of Pacquiao as PDP-Laban presidential bet illegal — Cusi wing
Drilon wants income tax records of Pharmally execs with luxury cars
Don't miss out on the latest news and information.