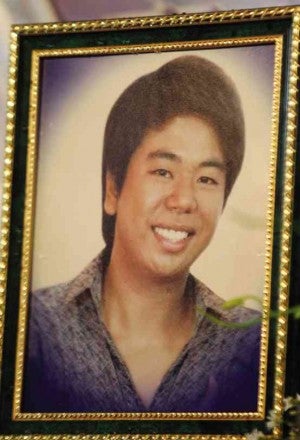 Saying they wanted to have peace of mind, the family of alleged hazing victim Marvin Reglos has started talks with representatives of all the accused for a possible out-of-court settlement of the civil aspect of the case.

Lawyer Dennis Pangan—who is representing the kin of the 25-year-old San Beda law student reportedly killed during hazing rites held by the Lambda Rho Beta (LRB) fraternity in Antipolo City last year—told the Inquirer in a phone interview on Tuesday that the family’s change of heart may be attributed to several factors.

Pangan said that some of the accused and their families visited Reglos’ grave in Isabela province during his death anniversary last February.

“According to the mother (Myrna Reglos), they went [there] to pay their respects to the dead and to [apologize] for everything,” he said, adding that the gesture “would melt a mother’s heart.”

He said Reglos’ parents also decided to start talks with the accused—after rebuffing “from the very start” feelers sent out by their representatives—after the two people arrested in connection with their son’s death, Bojhee Yap and Eric Castillo, were allowed to post bail by the judge handling the case.

Pangan added that another factor in the couple’s turnaround were the expenses they would incur every time they attended court hearings in Manila, including the costs of traveling from Isabela province to Antipolo City where the trial was being held, and lodgings in Manila the night before the hearing.

He said that Myrna, who used to be a teacher in Korea, was now out of work while her husband, Lucito, who is undergoing chemotherapy, wasn’t earning a lot as a farmer.

The couple also have a daughter who is still in college, added Pangan who is handling the case on a pro-bono basis.

He pointed out, however, that although money was one of the Reglos’ considerations in looking at the possibility of an out-of-court settlement, his clients, whom he described as living “a simple life,” were not after financial remuneration but peace of mind, particularly Myrna who was “a devout Catholic.”

Asked whether hearings on the murder charges filed against the accused, all LRB members, would continue even if a settlement between both parties was reached, Pangan replied in the affirmative, saying “the criminal aspect of the case would proceed.”

“On my part, I will still be doing my job and will attend hearings,” he said.

He added, however, that the reality was that if a settlement would be reached, this would be interpreted as a loss of interest on the part of the complainant to pursue the case against the accused.

According to Pangan, no initial settlement amount has been discussed at this point.

In addition, none of the parties has set a deadline for the negotiations, he said.

“Until they settle the issues, [the talks will continue]. It’s like a (collective bargaining agreement),” the lawyer explained.