Half-naked people to be fined or jailed in San Juan 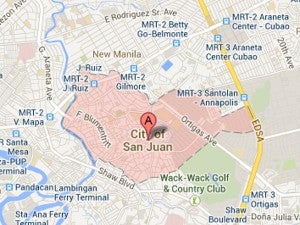 MANILA, Philippines — Going out of the house half-naked in the City of San Juan may not only earn you stares from other people: it can also mean a fine or worse, a three to five-day stay in the city jail.

The city government has banned people from appearing half-naked or shirtless in public places as it noted that being a “premier urban center,” San Juan must “set an example of orderliness, propriety and decency.”

“No person shall move about (i.e. walk, jog, run or the like) in public places and outside his public residence half-naked or wearing clothing covering only the lowermost portion of the body without any top apparel,” said a provision in the ordinance approved and passed by the city council and Mayor Guia Gomez months ago.

The ordinance applies to everybody, including babies. Although Section 2 refers only to people who go out in public without any upper clothing, Section 3 defines “half-naked” as either topless or bottomless, specifically, “wearing clothing covering only the lowermost or uppermost portion of the body with the absence of any top or bottom apparel.”

The ordinance—which does not say anything about appearing in public completely naked—was drafted and approved in line with a 2003 resolution from the Metropolitan Manila Development Authority, which urged local governments to enact an ordinance on dress code in public places.

For the first offense, a violator will be given a warning. For the second offense, they will be fined P300 or ordered to render eight hours of community service, and for the third offense, they could serve from three to five days in jail.

The city’s Public Order and Safety Office, Task Force Disiplina, the police and barangay (village) watchmen were tasked with implementing the ordinance.