SSS head defends bonuses; says everyone got them 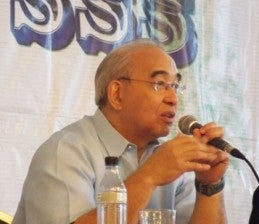 MANILA, Philippines – Emilio de Quiros Jr., president and chief executive officer of the Social Security System, has confirmed that he and seven other members of the SSS board got at least P1 million each as bonuses for the good performance in 2012 of the pension fund for employees in the private sector.

He was quick to add, however, that bonuses amounting to P276 million, also were distributed to other employees of the state-run pension fund, whose members face an impending mandatory increase in contributions next January on grounds the SSS won’t have enough funds to cover retirement and other benefits beyond the year 2039.

De Quiros said the bonuses—both the estimated P10 million for the eight board members and the P276 million for its employees—were given in accordance with the performance-based incentive system set by the Governance Commission for Government-owned or -controlled Corporations.

The commission, which is under the Office of the President, is in charge of policies governing the operations of state-owned companies. The SSS, however, is a fund owned by its members although it is run by the government.

De Quiros said the granting of bonuses under the performance-based incentive system was not a practice observed only by the SSS but all other state-owned companies.  The SSS, however, is a pension fund owned by its members although it is run by the government. Contributions to the fund come from employees and their employers, not the government.

“What came out [in the news] was that the SSS board got bonuses. What did not come out in the report was that the employees got bonuses as well,” De Quiros told the Philippine Daily Inquirer in an interview late Friday.

Besides De Quiros, the SSS commissioners who comprise its board and who reportedly got at least P1 million each, are the following: Juan Santos, Diana Pardo-Aguilar, Daniel Edralin, Eliza Bettina Antonino, Marianita Mendoza, Ibarra Malonzo, and Bienvenido Laguesma.

De Quiros said some confusion might have been brought about by the time lag between the distribution of bonuses to employees and the board.

He said the lag might have led some employees into believing that the bonuses given board members in September were on top of the bonuses paid out earlier.

De Quiros said he suspected the complaints received by the SSS board might have come from disgruntled employees who did not receive any bonus due to poor performance.

Under the incentives system, embodied in GCG Circular 2012-11, employees are graded by their superiors for their performance.

The SSS currently has about 5,000 regular employees.

Board members’ bonuses are computed largely on the bases of their attendance at meetings.

De Quiros said the incentive system applies to state-owned companies that register net incomes. But the governance commission circular also allows the granting of bonuses to officers and employees of losing state-owned firms but at lower rates.

Its net income is computed as income derived from its investments plus premium contributions from members less expenses for operations and payment of members’ benefits.

But while it enjoys a net-income position, the SSS suffers from huge “unfunded liabilities” estimated at P1.1 trillion.

“Unfunded liabilities” of a pension fund are obligations at a certain time in the future for which no funds have been set aside yet.

The SSS has estimated that its existing reserve fund would be enough to cover liabilities for the next 26 years or until 2039.

But following the pending hike in members’ contributions scheduled to take effect in January 2014, the SSS estimates that the life of its fund will be good to cover liabilities until 2042.

According to international standards, pension funds should have reserves enough to cover liabilities for at least 70 years.