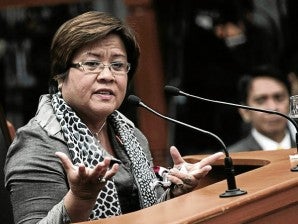 ZAMBOANGA CITY—Two hundred and twenty-nine members of the Moro National Liberation Front who took part in a deadly, three-week confrontation with government troops here are to be transferred and detained at a suburban Manila police camp as soon as a court issues a commitment order, Justice Secretary Leila de Lima said here Saturday.

De Lima visited Saturday the San Ramon Penal Colony in the adjacent province of Zamboanga del Sur where the captured MNLF fighters, who have been charged with rebellion and crimes against humanity, are currently being held.

“As soon as a commitment order will be issued by a judge after their case has been filed they will be transported and detained in Bicutan,” De Lima told the Philippine Daily Inquirer.

She said the Philippine National Police’s Camp Bagong Diwa in Taguig has sufficient facilities to house the MNLF fighters while they face trial for their attack on Zamboanga, which led to fighting that lasted for three weeks, resulting in the killing of more than 200 persons, 167 of them MNLF fighters, and the displacement of more than 100,000 persons who were razed to the ground by fires or heavy bombardment.

De Lima disclosed that five MNLF fighters, aged between 14 and 17, were now housed at a halfway facility for minors in conflict with the law.

She described her meeting with the young MNLF members as “heartbreaking.” The youngsters, all of them Tausug, kissed De Lima’s hands before and after their brief conversation.

“In the case of the minors, I have ordered prosecutors to assess the degree of their participation,” De Lima said.

One of the boys, who claimed he was from Jolo, told De Lima he accompanied his grandfather to Zamboanga ostensibly to attend a peace rally. He said his grandfather was a member of the MNLF and was one among those killed in the fighting.

De Lima observed that the MNLF members detained at the minimum-security San Ramon Prison and Penal Farm were mostly young men, “probably in their 20’s.”

The detained MNLF members were hidden from outside as the entire building was covered with blue tarpaulin sheets on two sides.

“The cover is a deterrent to possible rescue operations and escape plans because they could not see the activities outside,” a jail guard told the Inquirer. The guard said an attempt to rescue the MNLF detainees was foiled by a military blocking force.

De Lima had said the justice department would petition the Supreme Court for a transfer of the MNLF fighters’ trial from Zamboanga City to Manila for security reasons. The MNLF rebels have relatives and supporters in Zamboanga who could create problems during the trial.

Misuari and Habier Malik, the commander who led the MNLF force into Zamboanga but whose whereabouts now the authorities have not been able to establish, are among those charged with rebellion and crimes against humanity.