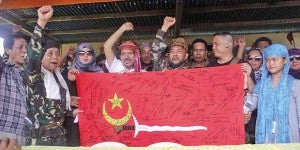 ZAMBOANGA CITY, Philippines—Police blasted their way on Friday into the home of Moro National Liberation Front (MNLF) chair Nur Misuari but were unable to serve the arrest warrant against the renegade leader who was not at the property.

Justice Secretary Leila De Lima, meanwhile, said that the justice department would file a motion in the Supreme Court for a change of venue in the trial of captured MNLF rebels after the filing of charges here on Monday.

“For security reasons, it’s not wise to conduct the trial in Zamboanga City because of relatives and possible supporters of the group in the area,” explained De Lima, who was in the city to personally supervise the buildup of cases against Misuari, Habier Malik and other MNLF leaders.

De Lima said there was “strong evidence” linking Misuari to the Zamboanga incident based on the statements given by hostages and captured MNLF rebels.

Aside from rebellion charges, Malik and other MNLF commandeers will also be charged with violating the International Humanitarian Law applicable in noninternational armed conflicts.

Chief Insp. Ariel Huesca, spokesperson of the Western Mindanao police, said they had to use explosives to enter the locked residential compound in Barangay San Roque on the outskirts of this city when no one came to the gate to receive the arrest warrant.

The explosion at 4:30 a.m. startled the residents of this city anew and drew protests from Misuari’s followers and MNLF officials, who described the raid as a violation of Misuari’s rights.

The serving of the warrant came two days after police filed formal complaints against Misuari for rebellion and crimes against humanity in the regional prosecutor’s office.

The government declared the rebel action crushed on Saturday with the release of the last of the 195 hostages.

De Lima said she was inclined to support the bounty suggested for the arrest of Malik, “[who] has an outstanding warrant of arrest since 2007, [so] we can put up a reward for his capture,” she explained.

Huesca said the state agents resorted to what he termed “special access or charge,” or the use of explosives to blast the gate of the house said to belong to the Moro leader.

“We’ve been knocking on the gates [as early as 3 a.m.] but no one came out. We decided to apply this method,” he said.

Huesca said police were ordered to arrest Misuari and seize munitions that may have been stored in the high-walled compound in a middle-class residential district about 7 kilometers (4 miles) from the scene of the fighting.

Investigators seized documents and “other items” from the property, he said, refusing to give further details.

Though Misuari was not at the house, a military source said the rebel leader remains in Sulu but “is moving around.”

Misuari’s lawyer, Emmanuel Fontanilla, accused the police of violating Misuari’s rights and said the warrant was “illegal because there is a final peace agreement under the principle of pacto sunt servanda (agreements must be kept).”

He also denied that the house raided belong to Misuari, although he acknowledged that the Muslim leader had stayed there “for quite some time.”

“That [piece of] property belongs to the MNLF and it was bought through the efforts and resources of the MNLF. Misuari has no real properties of his own,” he said by phone.

The lawyer also downplayed the arrest warrant on Misuari and other leaders of the erstwhile rebel group, saying that the MNLF is “a belligerent group; the warrant is irrelevant.”

Huesca said the police action and serving of the warrant were in order, and that if Misuari had been taken in, he would have been given time to air his side on accusations that he ordered his men to invade this city.

“Warrants can be served anytime,” the police chief said.

Moro rebels have been fighting since the 1970s for an independent or autonomous homeland in Mindanao, south of this mainly Catholic country.  An estimated 150,000 people have died in the conflict.

The MNLF, founded by Misuari, signed a peace treaty in 1996 that granted limited self-rule to the South’s Muslim minority.