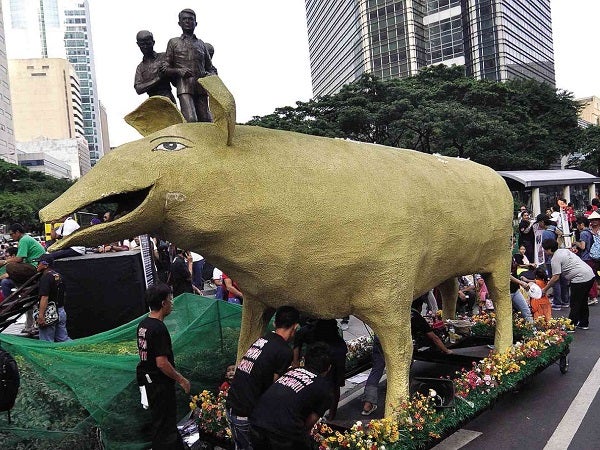 GOLDEN PIG A huge golden pig made of papier-mâché serves as the mascot of Friday’s Million People March on Ayala Avenue, Makati City. The rally called on business leaders to join the fight for the abolition of the graft-tainted pork barrel. RICHARD REYES

It cannot get more ironic than this.

Friday’s march against the pork barrel on Ayala Avenue in Makati City was staged in front of the monument of martyred Sen. Benigno “Ninoy” Aquino Jr. to urge his only son and namesake to listen to the call of the people to change a government system that allows rampant stealing of taxpayer money by corrupt public officials, leaving the country impoverished.

It was the fifth mass protest against the Priority Development Assistance Fund (PDAF) since more than 100,000 Filipinos marched to Manila’s Rizal Park on Aug. 26 to demand the abolition of the pork barrel.

The public anger was sparked by the government’s discovery and investigation of the supposed theft of P10 billion from the PDAF involving businesswoman Janet Lim-Napoles and members of both the Senate and the House of Representatives.

Napoles allegedly siphoned off P10 billion from the PDAF into her bank accounts through fake nongovernment organizations in connivance with the lawmakers.

The government has brought plunder charges against Napoles, three senators and several former and current members of the House for the pork barrel scam.

Yesterday’s protest, which started at 5 p.m. and still billed as Million People March, failed to match the size of the Luneta rally. Makati police chief Senior Supt. Manuel Lukban estimated the number of people who came to the rally at 2,600 as of 7 p.m..

But investors watching the protests, concerned that public anger at official corruption may be diminishing the popularity of President Aquino and his infrastructure program.

The organizers of yesterday’s protest hoped to attract participation from workers at the businesses on Ayala Avenue, but the cool response from the financial district showed the movement against the pork barrel had yet to win institutional support from the business sector.

Although business groups are slow to respond, Cruz said many businessmen in Makati share the public’s sentiment about the pork barrel personally.

Richard Anthony Liboro, director and head of high net worth sales at BPI Securities, said the mass protests had no impact on business sentiment over the short term.

“But if it drags on, there could potentially be a long-term impact on the economy and the market because this could constrain funding for (public-private partnership) projects and other projects,” Liboro said.

Workers in the business process outsourcing industry supported the movement, according to the BPO Industry Employees Network (BIEN).

“If the taxes we pay to the government are only being pocketed by big politicians, we might as well keep our money,” the group said in a statement issued during the rally.

The misuse of billions of pesos in public funds through the pork barrel “is literally taking food from our mouths, the seats from our classrooms, and the roofs over our hospitals,” said  Giovanni Tapang, national chair of the Advocates of Science and Technology for the People (Agham), in a brief speech on the stage.

“They have stolen our future from us because of the pork barrel system,” he said.

President Aquino can leave a “legacy” if he heeds the call of the people to scrap all forms of  pork barrel, including the Presidential Special Fund (PSF), said Peachy Tan, spokesperson for the Scrap Pork Network, one of the organizers of the Million People March.

Tan said the network was calling on Mr. Aquino to direct government auditors to look into how the presidential fund has been spent in the first three years of his administration.

‘Talk to your son’

Central figures in the protest rally expressed dismay at

Mr. Aquino for turning a deaf ear to the call of his “bosses,” the Filipino people.

Paner was one of the organizers of the Million People March.

National Artist for Literature Bienvenido Lumbera was there, too, and he told the protesters that his group of artists would not stop calling on Mr. Aquino to introduce reforms in the government’s budgetary system.

Lumbera, who heads the Artista Kontra sa Corruption, urged the President to do what is expected of him as the son of Ninoy and Cory, both of whom were “cloaked in virtue.”

But the organizers of the protest made it clear that the Million People March was not for the ouster of the President. Instead, they said, it was a call for change in the system and to make corrupt public officials accountable, whether they were from the opposition or allies of the administration.

A number of people reacted angrily after an alternative rock band, “Guns and Goons,” ended a song with an expletive directed at Mr. Aquino. The group was immediately ushered down the stage.

“Personally, I am not calling for the ouster or resignation of P-Noy (President Aquino’s nickname).  What I want is for P-Noy to listen. That’s all we want, for him to listen [and] scrap all pork and listen to the people so that genuine change can happen for the good of all,” Paner told the Inquirer earlier in the afternoon.

In general, the continuing protests by the Million People March and other organizations is “antisystem,” Tan said, acknowledging that there were groups in the rally with complaints against the administration.

She said that what unifies the protesters is the sentiment against the pork barrel, as well as the little-known Disbursement Acceleration Program (DAP) from which Budget Secretary Butch Abad released millions of pesos to senators and congressmen after the ouster of former Chief Justice Renato Corona by impeachment last year.

“We want to clarify that this is not directed toward one person. Personally, I believe that he wants a straight path. P-Noy is a good person. He is not a thief. But the point is, we have a rotten system that will still be there after he steps down,” she said.

Tan said Mr. Aquino would be leaving a “legacy” if he removed all forms of pork barrel.

“Whoever comes after him,  taxpayer money will not be vulnerable anymore,” Tan told the Inquirer.

Renato Reyes, Bayan secretary general, said the pork barrel issue is being “addressed to the President himself because who else would craft the policy?”

“Who will set the direction of the country? It will all fall on the President,” Reyes said, stressing that Mr. Aquino failed to hear the voice of the people despite four earlier protests against the pork barrel.

Tan said: “We want the President to listen to us.”

She criticized presidential spokesperson Edwin Lacierda for saying that if the protests were against the misuse of pork, then the administration was one with the people.

“But it is not just the misuse. They are focusing only on the opposition. Were there allies who have been investigated? None. Are they saying all the allies are clean? We don’t want mere ‘samples’ of those who would be made accountable,” Tan said.

An estimated 3,000 people also signed the Million People March petition on the online advocacy site, Change.org, calling on the Aquino administration to scrap all forms of pork barrel, account for all pork spent and investigate and punish all those who abused the PDAF.

At the rally, the Scrap Pork Network urged both the government and the people to live up to their responsibilities as citizens.

The group called on the citizens to monitor the budget process when Congress opens and on the Senate to remove the PDAF from the budget.

The network also urged the opening of the Senate-House conference on the budget to the public; called for the creation of an independent commission to include the private sector to look into what laws could be amended so that discretionary funds could be abolished; and for a better government audit system that would determine if certain government projects are necessary.

The group also pressed for the passage of the freedom of information bill in the House of Representatives and urged Mr. Aquino to certify it as urgent.

The group expressed support for the call made by Million People March organizer Peachy Bretaña for the filing of cases against the abusers of the pork barrel in the Sandiganbayan within 100 days.

These are not just the complaints filed in the Office of the Ombudsman, Tan said.

“We want an investigation and prosecution of all. We want speedy justice so that they can return our money,” she added

The network also called for the realignment of the presidential fund to line agencies.

“We understand the need for emergency funds for calamities but we also need a clear mechanism for oversight,” Tan explained.

Yesterday, speakers were allowed on stage to deliver messages, unlike in the Million People March in Luneta, which was tagged as “leaderless.”

The turnout at the Ayala rally was low, but Tan said the number of people was immaterial as long as the message was sent across to the government and to Mr. Aquino.

In Malacañang, Lacierda said the Palace was open to discussions with the organizers of the protest so it could fine-tune government programs that would deal with inefficiencies and gaps in the delivery of social services like medical and educational assistance to the poor.

An alliance of church leaders and businessmen yesterday joined the public in demanding the abolition of the pork barrel.

In a statement issued as the Makati rally began, the Bishops-Businessmen’s Conference for Human Development (BBC) described the pork barrel as “institutionalized dissipation” of scarce government resources, and said the Filipinos could fight corruption only if given the full and correct information.

“The call for the abolition of the pork barrel underlines the necessity of passing the (freedom of information) bill, because full and correct information is the lifeblood of citizen power to effect change,” the BBC statement said.

The group said it opposed the pork barrel because it gave the President a means to control the legislature and bend it to his will by releasing or withholding funds.

“The pork barrel is an abuse of the congressional power of the purse. It is institutionalized corruption that uses the people’s money in order to serve not their interests but the personal interests of individuals,” the BBC said.

Cebu Archbishop Jose Palma, president of the Catholic Bishops’ Conference of the Philippines (CBCP), reiterated his appeal to President Aquino to listen to the growing public clamor for the abolition of the pork barrel.

“The sentiment of the majority is to scrap the PDAF [and] the presidential pork barrel,” Palma said. With reports from Doris Dumlao, Michael Lim Ubac, Jocelyn R. Uy and Jaymee T. Gamil