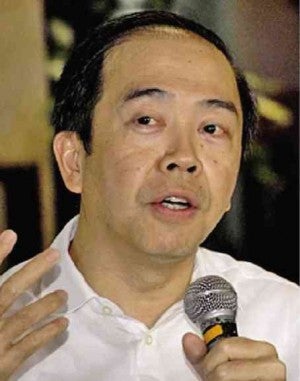 “If he has any decency left in him he should resign,” Rodolfo “Jun” Lozada told reporters in an ambush interview.

“He has the courage to dare his critics to impeach him? Pass the Freedom of Information bill then to impeach him will be easy,” he said.

Thousands of people from militant groups and various sectors marched to the Ninoy Aquino statue at the intersection of Ayala avenue and Paseo de Roxas in Makati to call for the abolition of the pork barrel system and the Development Assistance Program (DAP).

“We are holding Aquino ultimately accountable for the entire pork fund mess. It is his power to push for changes in the system yet he stubbornly refuses to do so and instead promotes the system of pork,” Fr. Joe Dizon, convenor of the Abolish Pork Movement, said in a statement.

Recently, additional fund allocations for lawmakers from the DAP was exposed by Senator Jose “Jinggoy” Estrada which he alleged was used as incentive for senators to convict former Chief Justice Renato Corona during his impeachment trial.

Lozada, who in the past blew the whistle on the NBN-ZTE deal under the administration of former president Gloria Macapagal-Arroyo, said that the anger of people against the pork barrel system was becoming like a wild fire.

“Forest fires start as small grass fires that could sometimes last for weeks. The fire intensifies when strong winds begin to blow,” he said.

Lozada to Aquino: ‘Scrap the mother of all forest scams’