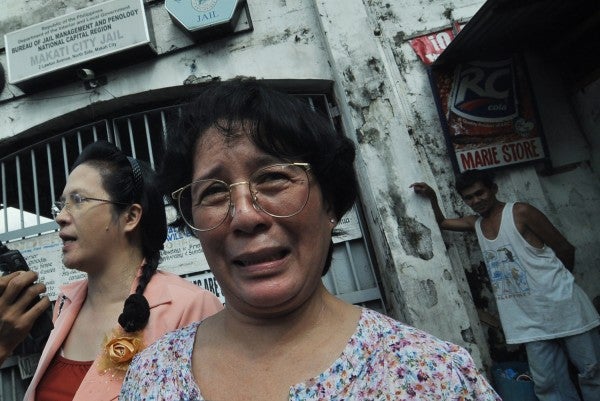 Dominga Cadelina (right), the former househelp of controversial businesswoman Janet Lim-Napoles with PAO lawyer Persida Acosta after she was ordered released from jail by the Makati City RTC Branch 145. Dominga was jailed in February this year for alleged qualified theft filed against her by Napoles. PHOTO BY RICHARD REYES

MANILA, Philippines—The tables have been turned on the Napoleses, with a Makati court on Friday ordering the release of a housemaid they sent to jail more than eight months ago.

In contrast, Napoles is detained in a police training camp in Sta. Rosa City, Laguna province, and facing plunder charges along with three senators and a number of former and current members of the House of Representatives for the P10-billion pork barrel scam.

Napoles’ husband, Jaime, and her brother, Reynald Lim, accused Cadelina of stealing $13,400 worth of luxury bags, women’s underwear and clothes from the family on Jan. 29.

Jaime Napoles, a retired military officer, claimed he sent Cadelina on an errand from their house in Dasmariñas Village, Makati City, to their other house in Forbes Park in the same city. He said he noticed that she was carrying a tote bag, arousing his suspicions.

Lim, sent by Jaime to monitor Cadelina, claimed he saw the maid put the things in a carton box at the Forbes Park home.

Among the items were a Balenciaga bag worth $1,800, an Yves Saint Laurent bag worth $1,800 and Maidenform underwear worth $800, all belonging to Napoles and her daughter, according to Lim.

The items also included an Yves Saint Laurent jacket worth $8,000 belonging to Jaime.

Lim said Cadelina claimed the things were her personal belongings that she was sending to her home in the province.

Cadelina denied the charges against her.

Calpatura, in his five-page decision resolving a demurrer to evidence filed by the Public Attorney’s Office (PAO), said the accusers’ story was “simply too naïve to be given full faith under the mantle of proof beyond reasonable doubt” and was “contrary to human experience.”

The judge said the prosecution failed to prove “the element of taking and the element of lack of consent by the owner of the things stolen.”

“The court has no alternative but to dismiss this case without further requiring the accused to present evidence in her defense,” Calpatura said.

Cadelina wore a floral blouse brought by her daughter Lily as she left jail.

Interviewed by reporters as she was being escorted out of jail, Cadelina said she wanted Jaime and Reynald Lim to pay for what they had done to her.

“Lim should surrender,” she said, referring to Lim’s going into hiding after a Makati court ordered him and Napoles arrested for the serious illegal detention charge brought by Luy.

“It’s karma. I want what happened to me to happen to them,” Cadelina said.

“I told them before, to their faces, ‘I hope our situations will get reversed,’” she said.

“Back then, I couldn’t do anything. My family was too poor to fight back so all I could do was turn to God,” she added.

She said that despite her pleas for mercy, Lim told her to “rot in jail.”

Not angry with Napoles

Cadelina said she was not angry with Napoles.

She said that among the family’s househelp, it was she that Napoles trusted most.

Cadelina said she waited on Napoles, even in the bathroom or in the bedroom, washing and brushing her hair.

“I feel sorry for her now. She is being treated like a pig,” Cadelina said.

She said she wanted to talk to Napoles when her former employer was briefly held at Makati City Jail following her surrender on Aug. 28.

“I would have continued to serve her then, even in that short time,” Cadelina said. “But I heard she was scared of me.”

‘No more of this chaos’

Asked if she wanted to serve as a state witness in the plunder case against Napoles, Cadelina vehemently said no.

“There are already so many of them. And I don’t want any more of this chaos,” she said.

PAO chief Persida Acosta said the demurrer to evidence that her office had brought for Cadelina was a “motion for acquittal” based on “defective information.”

“For one, the prices of the items as stated in the information were different from the prices listed on the receipts,” Acosta said.

The receipts for some of the items, including the jacket, appeared to have been hastily handwritten, she said.

No proof of ownership

Cadelina’s lawyer, Makati public attorney James Abuzo, said: “There was no taking without the consent of the owner, because the prosecution failed to prove that the complainant (Jaime) owned the items allegedly stolen,” especially the women’s underwear.

And the resolution noted that the prosecution presented no proof or witnesses to establish qualified theft.

Acosta said the defense had not yet decided whether Cadelina would take legal action against her former employers.

“We are prioritizing her health and security,” she said.

Cadelina said she wanted to go to church after leaving jail.