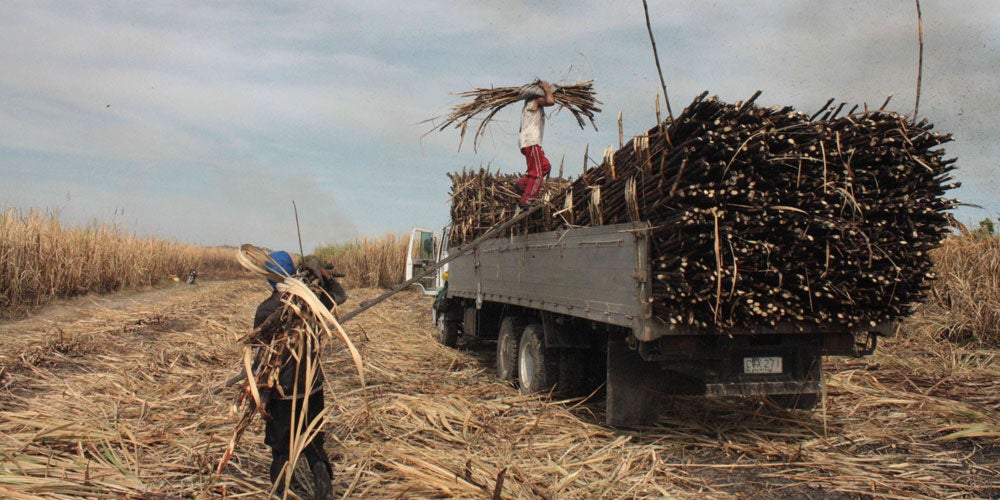 FARM workers who have tilled the sugarcane fields of Hacienda Luisita for decades are now the owners of about 4,100 hectares in the estate through the government’s land reform program. E.I. REYMOND T. OREJAS

The pockmarked road leading to Barangay (village) Pando inside Hacienda Luisita in Tarlac province is as rough as the journey taken by farmers of the sugar estate who toiled for decades, awaiting the chance to own their land.

On Monday, that journey finally ended.

The Department of Agrarian Reform (DAR) handed the very first certificate of land ownership award (Cloa) covering a portion of Hacienda Luisita to 82-year-old Benigna Mañalac, who was glad she was living long enough to witness history in the making.

The DAR has processed Cloas for 6,212 beneficiaries inside the estate owned by the family of President Aquino.

Mañalac was joined by Feliciano Escaño, Rosenda Tobias and Evelyn Nicdao, who were among the first of around 600 beneficiaries from this remote corner of the hacienda in Concepcion town.

Agrarian Reform Secretary Virgilio de los Reyes led the Cloa distribution on Monday, which will proceed three times a week until everyone receives the certificates. The agency expects to complete the process on Oct. 18.

De los Reyes said the first Cloa released represented 390 hectares of the estate. Close to 4,100 ha in the 6,433-ha Hacienda Luisita are covered by land reform.

“I thank God I have lived to see this day,” Mañalac said in Kapampangan. She

described the distribution as her happiest moment.

She has been unable to walk for the last 10 months due to a hip bone fracture, but she said she would make sure that her family’s land would be productive. The Cloa represented her claim and that of her late husband. 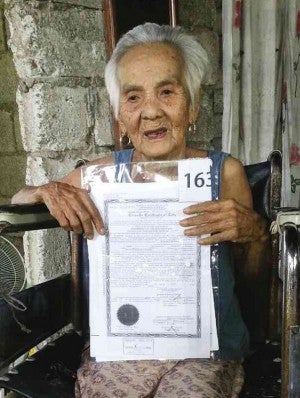 “I am old now, but I will let my children work on the farm,” she said.

Mañalac said she had worked at Hacienda Luisita all her life, pulling out weeds and planting cane every year in the fields. She retired at 65, having served as a general foreman for 16 years.

Seven members of the Mañalac family are agrarian reform beneficiaries and they opted for adjacent lots so they could farm these lands as a group.

For Escaño, 72, one of the first beneficiaries, the Cloa meant that he could tap other farm workers and form an association so they could pool resources and make the land productive.

He was glad that the government undertook soil tests, so he would be confident about the crops he intends to grow on these fields.

Tobias, 76, a widow with 10 children, could not hide her glee. Despite her retirement, she said she was confident that she could pay the monthly amortization for the piece of land she now owns.

Tobias receives a monthly social security pension, which, she said, was sufficient to cover the P61 monthly amortization and provide some capital for the vegetable and palay she would plant.

She said she just needed to cut down on her cigarettes to make the plan work. A pack costs P30 and she consumes a pack a day, she said.

In a DAR statement, the beneficiaries would pay about P75,000 for the 6,600 square meters of land given to each of them.

The agency expects to receive P61 each month for the first three years from the Cloa beneficiaries. On the fourth and fifth year of amortization, the beneficiaries are required to pay P118 each month.

From the sixth year until the 30th, the beneficiaries are required to pay P230 each month.

Like most villages inside the estate, some beneficiaries still need to address some concerns.

In Barangay Pando, large tracts of land have been leased out to sugar planters and that contractual agreement would be terminated only on the cropping period between 2014 and 2015.

Other areas there have also been rented out to citrus growers from Nueva Ecija province and the plants are still in their flowering stage.

But De los Reyes said the “informal allocations will not be honored by the DAR.”

It is precisely this reason, he said, why the “tambiolo” or raffle system was used in parceling out the property so the distribution would be fair.

Once the Cloa distribution is completed, De los Reyes said the next step for the agency would be to install boundary monuments “as soon as the land has been cleared of standing crops.” He said many of the fields were still planted with sugarcane.