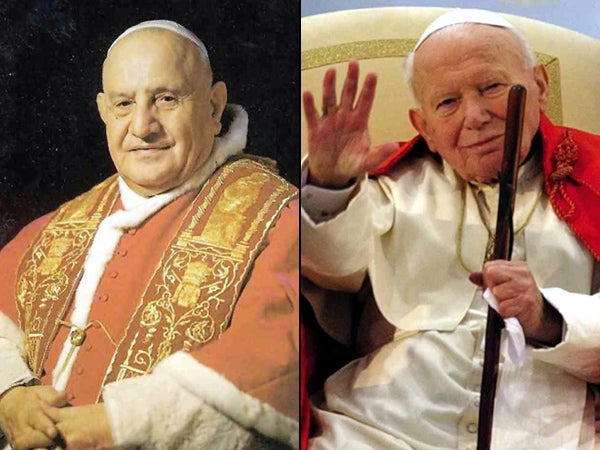 Pope John XXIII (left) convened the liberalizing Vatican II in the 1960s; John Paul II guided the Church during the end of the Cold War. AP

VATICAN CITY — The Vatican on Monday said late popes John Paul II and John XXIII would be made saints at an unprecedented joint ceremony on April 27, 2014 in a bid to unite Catholic conservatives and liberals.

Pope Francis made the historic announcement at a meeting of cardinals known as a consistory.

The canonization of the two popes is expected to bring hundreds of thousands of pilgrims to Rome.

The popular Polish pope John Paul and his Italian predecessor known as “Good Pope John,” are two of modern-day Catholicism’s most influential figures.

The double sainthood is seen by Vatican watchers as an attempt to breach a traditional left-right divide in the Church.

“John XXIII is generally a hero to the church’s progressive wing while John Paul II is typically lionized by Catholic conservatives,” said John Allen, from the National Catholic Reporter, a US weekly.

Allen said the decision could be interpreted as “a statement that any attempt to set them at odds is artificial, and that what they had in common is more fundamental than any perceived differences”.

Sainthood normally requires two “confirmed” miracles, though Francis has approved the canonization of John XXIII (1958-1963) — with whom he shares a common touch and reformist views — based on just one.

John Paul II, who served as pontiff from 1978 to 2005, was credited with his first miracle just six months after his death, when a French nun said she had been cured, through prayer, of Parkinson’s — a disease he had also suffered from.

His second miracle was reportedly carried out on a woman in Costa Rica, who said she was healed from a serious brain condition by praying for John Paul’s intercession on the same day he was beatified in 2011.

The Polish pope was popular throughout his 27-year papacy and helped topple Communism — although he alienated many with his conservative views and was blamed for hushing up paedophile priest scandals.

At his funeral in 2005, crowds of mourners cried “Santo Subito!” — “Sainthood Now!” — prompting the Vatican to speed up the path to sainthood, which normally begins five years after death.

John XXIII made his name by calling the historic Second Vatican Council (1962-1965) which overhauled the Church’s rituals and doctrines and reached out to other faiths.

Many compare the Italian pope, who died in 1963, with the current head of the Roman Catholic Church for their similar pastoral attitudes, humble, open manner and sense of humor.

The reportedly miraculous healing of an Italian nun who had severe internal hemorrhages was attributed to John XXIII when he was beatified in 2000.

Francis is believed to have waived the need for a second miracle because his canonization had been called for by the participants of the Second Vatican Council in 1965, who wanted to pay homage to the man who ushered the Church into modern times.

Francis also promises to be a reformist pope, planning an overhaul of the Vatican bureaucracy and finances and promising a “poor Church for the poor.”

On Tuesday, he will begin three days of talks with an advisory board of eight cardinals he has appointed to help him clean up the troubled Roman Curia — the intrigue-filled administration — and improve communication between the Vatican and local churches.

Vatican experts say it is not clear whether details from the meetings will be made public, but liberal Catholics hope that the conciliatory tone adopted by Francis on many issues will translate into action.

Topics may include the role of women in the Church, whether priests should be able to marry, if Catholics who remarry should receive the Eucharist and the Church’s position on homosexuality and gay clergy.