The morality of leaving office 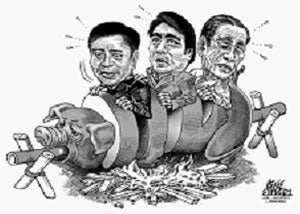 As we predicted, the moment has arrived when people are urging officials involved in the congressional pork barrel scam to resign.

The Cebu Coalition Against the Pork Barrel System, an umbrella organization of groups calling for the abolition of lump-sum appropriations in government finances yesterday signed a statement calling on solons like Senate Minority Leader Juan Ponce Enrile, Sen. Jose Estrada and Sen. Ramon Revilla, Jr to step down.

The three are among nearly 40 persons including members of the Lower House charged with plunder and graft by the Department of Justice (DOJ) in the first wave of cases related to the P10 billion pork barrel scam allegedly facilitated by Janet Lim Napoles.

The Cebu coalition pointed out that Enrile, Estrada and Revilla’s lingering in the Senate could cow witnesses testifying about the scam in Blue Ribbon Committee hearings.

Sen. Miriam Defensor Santiago chose to be more graphic and intimated that persons like Enrile could easily order the liquidation of Napoles to silence her forever and bury her damning testimony.

We agree that the resignation of the accused senators, congressmen and other officials should be underway but not only because this would take some heat off the witnesses.

But the fear for life felt by those who testify can be assuaged by tight security provided by the National Bureau of Investigation and the DOJ, the brilliance of their lawyers, the support of their loved ones and the eagle-eyed vigilance of an aroused public.

And should the impleaded officials resign, thereby disengaging from their powerful networks in the government, law enforcers would still need to be on alert in protecting the witnesses.

(That whistle-blower Benhur Luy was made to wear a bullet-proof vest when he gave his testimony in the august halls of the Senate was no excessive measure.)

Beyond lending some comfort to witnesses and containing the powers of the accused, the latter’s resignation would also preserve the honor of the Senate and the House of Representatives.

Sociology professor Randolph David of the University of the Philippines remarked in his column yesterday in the Philippine Daily Inquirer that our politicians are bereft of the traditional values of delicadeza and sense of honor as the nation strains towards modernity.

Enrile should not belittle these values. In the sunset of his years, he can show that age has not so calcified his sense of right and wrong and take the logical though graceless exit unless, he’d rather leave behind a dubious legacy and brazen it out in the Senate.

Estrada can spare us the stress by following the footsteps of his father, then president Joseph who left Malacañang in 2001, days after his aborted impeachment trial at the Senate and amid the second Edsa People Power Revolution.

Revilla, who invoked divine enlightenment amid this imbroglio would do well to contemplate the meaning of the maxim “The voice of the people is the voice of God” as he listens to those who clamor for him to go.

Officials implicated must think beyond self-preservation as they prepare to render an account of themselves in court. Only when they go, leaving other senators more impartial in conducting probes, will the tempest subside and public trust be restored.

The people, meanwhile, must insist on the timelessness of delicadeza and a sense of honor.