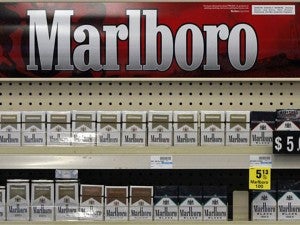 WASHINGTON—Nearly nine out of 10 children in China can identify a cigarette logo, according to a US study out Monday that measured tobacco recognition among five- and six-year-olds in various countries.

The study in the journal Pediatrics covered six nations—China, India, Nigeria, Pakistan, Russia, as well as China — where adult smoking rates are the highest, according to the World Health Organization (WHO).

More than two thirds of the children studied (68 percent of the 2,423 participants) could identify at least one cigarette brand logo.

The findings raise concerns about whether low and middle income countries are complying with international bans on tobacco advertising to young children, the study authors said.

“What was amazing to me was how we saw kids who don’t live with smokers but were very aware of cigarette brands,” lead author Dina Borzekowski of the University of Maryland told AFP.

“What that says to me is they are getting their messages through the community, in their environments. They are seeing it at retail establishments, they are seeing posters. When they go off to buy a piece of candy at a local store, they are seeing these logos.”

For the study, researchers sat down with children and played a matching game, in which the youths were asked to pair a logo with a picture of a product, such as a car, beverage, food item or pack of cigarettes.

All the children were shown Marlboro and Camel logos, along with local brands that were distinct to their country.

“We would show them a logo and they would have to pick up a card with the product,” said Borzekowski.

The highest recognition rates were in China, where 86 percent of children could identify at least one cigarette brand logo.

“In China, on average, kids knew almost four out of eight of the brands,” Borzekowski said.

“These are little kids. The idea that they can recognize logos at this young an age is amazing.”

At the opposite end of the spectrum was Russia, where 50 percent of children studied knew at least one cigarette logo.

More than a quarter of all children studied could identify two to three cigarette brands, and 18 percent knew four or more.

Children were also asked if they intended to smoke when they grew up. The highest yes rate was in India, where 30 percent—both boys and girls—said they planned to be smokers as adults.

In China, Nigeria, Pakistan and Russia, boys were more likely than girls to say they would smoke as adults.

The study was done in selected urban rural areas in the host countries, and researchers said they endeavored to make sure the children were “typical” and not from wealthier communities where awareness of tobacco marketing might be higher.

However, they noted that because the studies were not nationwide, they “may not reflect the national populations in each country.”

The WHO has a Framework Convention on Tobacco Control that is signed by 168 countries and calls for limits on advertising and marketing to children.

“The problem is in low and middle income countries, I don’t think there is good regulation,” said Borzekowski.

“So even though the laws are on the books, they may not be adhered to.”