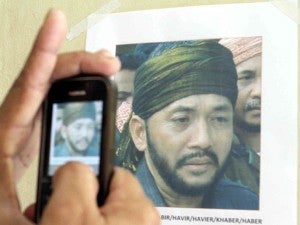 WANTED A wall poster of Habier Abdul Malik is at the main entrance of the central police station in Zamboanga City. EDWIN BACASMAS

“We found the identification card of Habier Malik in one of the bodies. We are processing if the body is really his,” said AFP spokesperson Lieutenant Colonel Ramon Zagala in a television interview Monday.

While some reports said he got wounded in one of the gun battles, others claimed that Malik had escaped the military dragnet and had retreated to the Sulu archipelago.

“Malik is not the only commander. There are five,” Zagala said.

Zagala said that among the five, four were already “either captured, surrendered or killed” since the hostilities in Zamboanga City erupted.

He said that after gathering leads on Malik, the military will now concentrate on the MNLF founder, Nur Misuari.

As of Monday morning, neither MNLF founder Nur Misuari nor Malik were unaccounted for.

End could have been earlier

“The crisis could have been over earlier if there were no hostages,” Zagala said.

Last Friday, Defense Secretary Voltaire Gazmin declared the military’s mission in Zamboanga City has been accomplished after successfully rescuing over 190 hostages held by the MNLF rebels.

The standoff  between government troops and MNLF rebels had lasted for about three weeks and had killed 189 Moro rebels, 23 soldiers and 12 civilians in bloody gun battles.

Zagala added that  their forces were able to defeat the MNLF and claimed that the Misuari-led group was “no longer a force.”

“We will continue to protect the Filipino people. The AFP serves the people. Whoever threatens our people, the AFP stands tall and firm against anybody. We have enough forces deployed nationwide,” he said.

Did Malik escape to Sulu