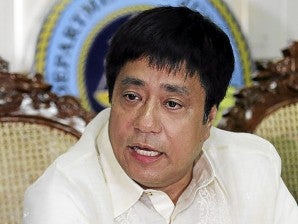 DISAPPEARANCE OF CONTAINER VANS. Bureau of Customs Commissioner Angelito Alvarez files smuggling charges at the Department of Justice in Manila on Thursday, August 25, 2011, against the consignees and brokers involved in the case of some 1,910 containers that disappeared while being transhipped from Manila to Port of Batangas between May and June this year. INQUIRER/NIÑO JESUS ORBETA

MANILA, Philippines — Customs Commissioner Angelito Alvarez said he would start packing his bags at the Bureau of Customs (BoC) after President Benigno Aquino III confirmed that he would replace the BoC chief.

“I serve at the pleasure of the President. As a presidential appointee we are aware that we can be replaced anytime. I respect his decision. I will start packing my bags,” Alvarez said.

Aquino confirmed in a radio interview that he was not satisfied with Alvarez’s performance and that he would be replaced.

Alvarez said his detractors have succeeded in removing him from office.

Last week, reports came out that Alvarez resigned from office which he denied.

Alvarez said some lawmakers as well as smugglers affected by the BoC’s anti-smuggling campaign have called for his resignation.

While there has been no confirmation on who would replace him, Alvarez said whoever would take over his position must be prepared because “politics” existed even inside the BoC.

Alvarez added that he was happy to return to his private life and has not regretted accepting the BoC post.