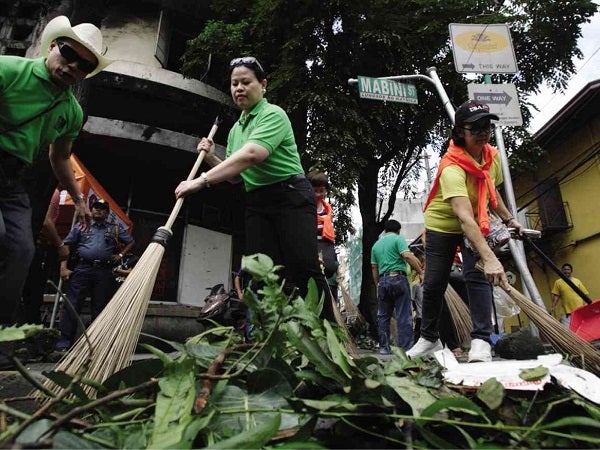 NEW START FOR THE NEIGHBORHOOD Michelle Pe of Miramar hotel (center) and other leaders of the Ermita-Malate Business Owners Association lead a street cleanup campaign on Friday to launch the revival of Manila’s tourist spots that have been losing their luster for the past few years. NIÑO JESUS ORBETA

MANILA, Philippines—It started with a simple broom and a paint brush—and a yearning for the good old days (and nights).

A group of businessmen on Friday jump-started a movement to revive the Ermita-Malate tourist belt in Manila, whose old, low-rise charm and vibrant nightlife once made it the “gimmick” place of choice away from giant malls and crowded arcades.

Members of the Ermita-Malate Business Owners Association (Emboa) led the street cleanup and the repainting of sidewalks on Mabini Street to launch a series of projects promoting heritage tourism and bringing back the romance particularly at Remedios Circle.

“We have to clean up the area to attract tourists,” said Michelle Pe, public relations officer of Emboa and general manager of Miramar, a hotel operating in a building constructed in 1938. “Some of us have been doing business here for 20 years and the area has really deteriorated.”

In support of the cleanup drive, members of the Manila police, the Metropolitan Manila Development Authority, and the city’s public service department helped rid the sidewalks of obstructions. The activity co incided with International Tourism Day.

Pe said petty crimes and vagrancy have been hurting Manila’s tourism industry, causing investors to look away and consider other cities. Emboa was formed last year as a private sector initiative to address the problem.

Among the projects in the pipeline are livelihood programs designed to take Ermita residents off the streets, to be conducted in partnership with Barangay 667, chaired by Noly Mendoza.

“We also plan to make them ‘street warriors.’ So they can take pride in cleaning up the area,” Pe said.

“Another priority is the revival of Adriatico and Remedios Circle, to bring back those establishments,” she said, referring to the bars and restaurants that made these strips “the ‘gimmick’ place back then.”

Manila being an old city with a rich historical and cultural background, “we are not just offering accommodations but also a sense of the history of Manileños,” she said.

According to Pe, Emboa has also begun offering “stay-cation” packages or very low rates in its member hotels.

Natalie Ng, the group’s finance officer and managing director of Kimberly Hotel, said “Emboa believes that we have to put our best foot forward. By joining hands and committing to the advocacy of returning Ermita-Malate to its old glory, the business sector and the government of Manila, as well as all residents and stakeholders of this beautiful place, can make all things happen.”